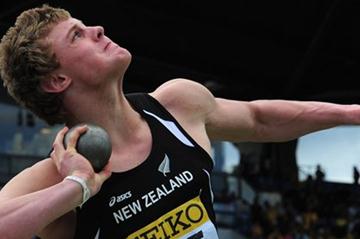 - Sixteen year old Jacko Gill broke his own national senior record in the Shot Put with a 20.38m effort in Auckland on Monday.

His first round toss at Sovereign Stadium in the New Zealand capital's North Shore added 37 centimetres to the mark Gill achieved in April and surpasses the B standard for next summer's Olympic Games in London.

The performance is also a new World's best for athletes aged 16 and 17. Gill was disappointed that he didn’t achieve the world’s best for an 18 year old with the 7.26kg shot which is 20.65m set by American Michael Carter on 4 July 1979.

“I wanted a lot more," said Gill, the reigning World Youth and World Junior champion. "I wanted 21 metres, but that’s okay. I’ve got to rest up and try to come out next Monday and get that 21 metres,” he said.

Gill was too young to compete at this year's World Championships in Daegu, Korea, but with Monday’s performance, in a hypothetical competition he would have qualified for the final and placed eighth overall. In a warm up throw Gill was out to 20.75m.

Gill became the first to breach the 24-metre barrier with the 5kg shot when he threw 24.35m at last summer's World Youth Championships in Lille.

New Zealand's second best shot putter Tomas Walsh, from Timaru, who is also still a junior set a personal best and Canterbury record of 18.83m in the senior competition. Damian Smuts was third with 15.34m. Ana Po’uhila won the women’s shot with 15.91m.