Legends gather to celebrate the mile in Monaco

“I wish I could be there with you,” Elliott said, “because we’ve shared some wonderful experiences together in the mile, and you are my brothers.”

Roger Bannister and Diane Leather Charles, who respectively became the first man to run the mile in under four minutes and the first woman to break the five-minute barrier for the distance, were also honoured.

Bannister and Leather Charles, who both achieved their barrier-breaking performances in May 1954, were recognised in the posthumous ‘Legend’ category.

Throughout an evening that used a mix of familiar and rare footage to recall more than eighty years of running over the imperial and metric mile there was a palpable sense of comradeship as those who had provided so many moments of excitement and elation paused to reflect upon their achievements.

Asked to recall his most treasured moment in a career that included a winning run of 40 races, Delany responded: “My lasting memory is of the Olympics in 1956, and at the Olympics the fellowship, the comradeship, the beauty of the Olympic Games. It was very much there at that time, when there was no television and no satellites. And there have been a lot of great miles afterward. So to be amongst my peers tonight – I’m so delighted to be here.”

Among the past contests highlighted was the epic 1500m race in Christchurch at the 1974 Commonwealth Games, where Bayi led from gun to tape to win gold in a world record of 3:32.2, taking almost a second off Ryun’s 1967 mark of 3:33.1, with home runner Walker – who was to become the first man to better 3:50 for the mile a year later – chasing him down the final straight.

“When I arrived in New Zealand nobody took much notice,” Bayi said. “My friend John Walker was a citizen of New Zealand, so the money was put on him. But John knew me. And we knew that something might happen there because there were also some very good Kenyans there like Ben Jipcho and Mike Boit.”

Walker added: “I’ve looked at the video over the years. Filbert ran an extraordinary race. I was coming from behind but I was never going to catch him. He went straight out from the gun and went to the front and broke the world record. That was never heard of in European racing. So – well done my friend.”

“I don’t think any athlete coming through our generation in British athletics could fail to be inspired, impressed or driven by Roger Bannister. I have always considered him to be the senior partner in tonight’s festivities. And I suppose there was added piquancy in that I broke the world record 25 years to the year after Roger first nicked under four minutes.

“So it’s a global event and it’s still massively important in British running.”

Reflecting on the 1954 achievement of her father in running the mile in 3:59.4 and then later following a medical career that saw him become an eminent neurologist, Charlotte Bannister-Parker, who is now an Anglican Minister in Oxford, said:

“There is no doubt that in running the four-minute mile, this feat that people thought was beyond human beings, he used his medical understanding that it was possible to make a physical achievement. So it’s a combination – you can’t take one out of the other.

“My father would be proud to be here, so delighted that Lord Coe’s put this on, and to be with all of you as great, great runners. It is the most remarkable athletic event.” 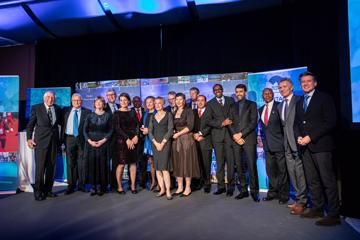