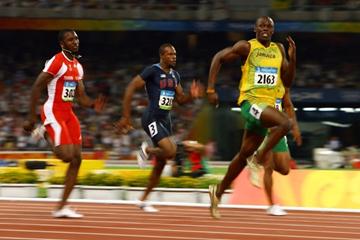 Beijing was struck by a 'Bolt of lightning' as the World 100m record tumbled with a simply staggering performance inside an awestruck Bird's Nest Stadium tonight (16).

Usain Bolt had promised us something very special after shattering the world record in New York earlier this year and we were not disappointed here in China as he stopped the clock in 9.69 in what is already regarded as one of the most exhilarating moments in Olympic track and field history.

He even had the temerity to slow down over the final 15 arms outstretched befor pumping his fist to his chest as he secured Jamaica's first ever Olympic 100m gold medal.

What made the performance even more amazing was his first competitve 100m race came only last year when he clocked 10.03 and the Olympic final was only his 13th race (and only eighth final) in his career over the distance.

Bolt himself was struggling to come to terms with what he achieved and said: "It was crazy, phenomenal. I wasn't even looking at the time I just came here to win. I am the Olympic champion. I'm just happy with that."

He also insisted his actions over the final 15m were not boastfulness.

"I wasn't bragging. When I saw I wasn't covered, I was just happy."

With World champion Tyson Gay not even making the final and Bolt recording 9.85 at a canter in the semi-finals, few would have backed against Bolt taking gold even with the presence of former world record holder and his countryman Asafa Powell also in the final.

The giant Jamaican looked relaxed at the start allowing himself a little smile and pulled back an imaginary bow to salute the crowd when his name was announced.

The final got away at the first time of asking amid a blizzard of flash lights from inside an electric Bird's Nest Stadium.

Trinidad's Richard Thompson in lane five, running alongside Bolt, made the best start with American Walter Dix, the US Trials runner-up, also prominent.

Bolt took a while to get his giant 6ft 5ins frame moving and Thompson still held a marginal lead at 50m but when the Jamaican's huge stride reached top speed he swept into the lead in what appeared a blink of an eye, and opening up an unassailable winning margin.

He then could allow himself the luxury of showboating across the final 15m to the astonishment of the crowd. The time - 9.69 - bettered his previous world record mark by 0.03.

Behind him mere mortals ran for the minor places on the podium.

Thompson, 23, the US Collegiate champion, backed up his superlative start to take silver in a new personal best of 9.89 and Dix snatched bronze with 9.91. Just 0.02 further adridft was Churandy Martina of Netherlands Antilles who set a national record of 9.93.

A stunned Powell was almost a forgotten figure. He was totally outclassed, recording 9.95 which was only good enough for fifth.

Michael Frater, the third string Jamaican, set a PB of 9.97 for sixth. Trindad's Marc Burns registered 10.01 for seventh with Darvis Patton eight and last in 10.03 - a time which would have been good enough for bronze at the 1992 Barcelona Games!

An elated Thompson described winning silver as 'a dream come true' and said of the gold medallist: "Usain Bolt is a great athlete to run a world record in the Olympic final. I tip my hat to him."

Dix, the bronze medallist, said: "I'm quite proud of the result. I'm glad to be on the podium for America."

A magnanimous Powell said of Bolt: "He's the best. There's no stopping him. I'm happy for Usain. He was definitely untouchable tonight. He's definitely the greatest."

Bolt, still aged just 21, has long been a precocious talent. At the age of just 15 he became 2002 World Junior 200m champion in his native Jamaica and he also displayed great versatility as a 400m runner.

Injury ruined his hopes at the Athens Olympics four years ago and although he has since shown flashes of his jaw-dropping ability - last season he won a 200m silver medal behind Tyson Gay at the World Championships in Osaka - he has finally managed to realise that potential.

He has cut down on the partying, taken a more disciplined approach and reaped the rewards under the coaching of Glen Mills.

The exciting prospect for all fans of track and field is that we have not seen the last of Bolt in Beijing.

Up until this season he was seen more of a 200m specialist and his performances over the half lap this season have also been sensational. He has a 200m best of 19.67 what price he can now threaten Johnson's 200m iconic world record of 19.32 in Wednesday's final.