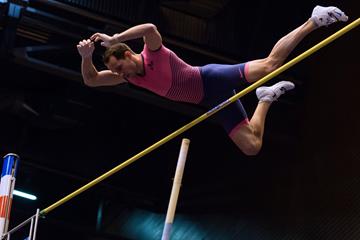 Lavillenie, known in Karlsruhe as ‘Mr Pole Vault’, returns to the venue where he set the meeting record of 5.91m in 2016. That was his third victory in the German city, following his wins in 2013 and 2015.

Hampered by a meniscus injury, the 33-year-old vaulted 5.82m indoors and 5.85m outdoors in 2019, but was some way short of his best form at the World Championships in Doha, where he was unable to reach the final.

Now fit again, Lavillenie is focused on the 2020 indoor season on his way to competing at what would be his third Olympic Games.

German sprint hurdler Roleder is also well acquainted with Karlsruhe and January’s race will mark her 10th appearance at this meeting. She won in Karlsruhe in 2015 and equalled her PB of 7.84 there in 2018.

“I have only good memories of this meeting,” said the 2015 world silver medallist. “It is a fixed date on the calendar for me every year. I always look at when this meeting is set to take place and then I’ll focus my training around it.”