Past Olympic champions Stephen Kiprotich of Uganda and Kenya's Ezekiel Kemboi are the latest star names added to the field of the Haspa Marathon Hamburg on 28 April.

Kiprotich, the 2012 Olympic and 2013 world marathon champion, will return to the northern German port city for the third time, after finishing second in 2017 and fifth one year ago. The 29-year-old, who is the national record holder at 2:06:33, clocked sub-2:08 performances in both of his Hamburg appearances.

Kemboi meanwhile, a two-time Olympic and four-time world champion in the 3000m steeplechase, will be making his eagerly-anticipated marathon debut.

The fastest runner on the start list is Ayele Abshero, who clocked 2:04:23 in his marathon debut at the 2012 Dubai Marathon. The Ethiopian returns after finishing third last year.

Kirui, the world champion over the distance in 2009 and 2011, has already announced his intention of chasing the course record of 2:05:30, set by Eliud Kipchoge in his marathon debut in 2013. Compatriots Jonathan Korir and Amos Mitei, who have personal bests of 2:06:51 and 2:07:28 respectively, are expected to join the hunt. Japan's Taku Fujimoto, who clocked his personal best of 2:07:57 in last year’s Chicago Marathon, will also be in the race. 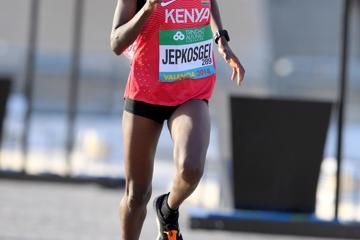