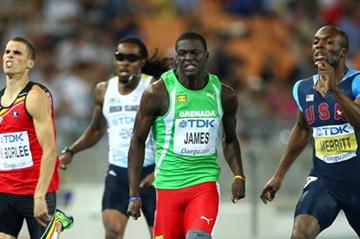 Kirani James a Bolt from the Blue

31 August 2011Daegu, Korea - Just when everyone thought there was only one Usain Bolt along comes Kirani James to prove otherwise.

Ever since he set world age-group records for the 400m as a 14 and 15 year old, the names James and Bolt have been linked like twins.

Not that you will find James too keen on the comparison. He already seems to have a clear idea of his own worth: “Usain is special in his own way, but I just want to be Kirani James from Grenada,” he says.

Now in his first season on the world stage, the teenager from Grenada who celebrates his 19th birthday tomorrow, September 1, is the World champion after overhauling LaShawn Merritt of the USA in the final few dramatic metres.

For such a young man it was a performance worthy of a much older head. Timing his effort to perfection, James let Merritt do the early talking before taking over the reins when it mattered most to claim gold.

Speaking with a maturity beyond his years, James held court when he came off the Daegu track, careful not to appear too complacent about his thrilling victory: “I could not take gold for granted,” he said. “There were too many good runners out there. But it’s a great feeling to be world champion. I am just happy to be here, representing my country.”

Many men of greater experience might have panicked when Merritt went past on the top bend, but James refused to panic: “My aim was to stay as relaxed as possible, follow my plan and finish strongly,” he said.

Following his plan to the letter, the teenager finished with impeccable timing to roars from an appreciative crowd and gold was his.

For the tiny island of Grenada it was a seismic shift. The highest any athlete from the island had finished in the World Championships was when Alleyne Francique came in sixth in the same event in 2001 and 2003.

Francique, not surprisingly, is one of James’s role models: “Francique inspired a whole generation. That was when the transition for Grenadian athletics happened,” he told last night’s press conference.

James’s journey to the Daegu track started in the small fishing village of Gouyave where he was spotted by his first coach, Albert Joseph, now an official with the Grenadian team in Daegu: “He was 12 at the time and he came along to the track just when he was moving from primary school to secondary school. He came for two weeks then stopped. He didn’t want to train at first and he did a little basketball and soccer.”

Eventually James came back to athletics, “because I realised I was good at it,” he said.

And how!  After world age-group records for a 13 and 14 year old, James went to the World Youth championships 2009 and came away with double gold in the 200m and 400m. One year later, he was World junior 400m champion: “He’s been breaking world age-group records since he came on the scene,” said Joseph matter-of-factly. “Every step of the way, he is like Bolt.”

Even better, in fact. At the age of 16 Bolt ran the 400m in 45.35 and the world was wowed, but when James attacked the distance at the same age, he was a full tenth of a second faster, clocking 45.24. Now, at the age of 18 years and 363 days he was proclaimed World champion. Bolt was 22 before he won his first senior World gold.

James is the ninth athlete in the history of the sport to win World youth, junior and now senior titles, just over an hour after Tatyana Chernova of Russia became the eighth in the Heptathlon.

There must be something in the Korean air that affects teenage quarter milers. It is 23 years since the USA’s Steve Lewis caused a similar upset in the Seoul Olympics when he lifted gold at the age of 19.

The irony is that Kirani is not the most talented of the James brothers. Joseph insists that elder brother Gary, now a teacher in Cuba, was more talented: “He was a huge inspiration to me,” agreed Kirani. “But he was good at about 20 sports.”

Coming from a small Caribbean island with only 104,000 inhabitants, it was inevitable that American universities would come knocking and James had “dozens of offers. It was fun going to see all the colleges and eventually I chose Alabama because they have a great staff and I liked the set-up.”

At Alabama he is coached by Harvey Glance, the 1976 Olympic sprint relay gold medallist: “I like Alabama because it gives me opportunities I would not get in Grenada like a good education,” he said. “And Harvey does a good job. He knows how to get me ready for big meets.”

Being an athlete, he is not particularly noticed on campus compared to American footballers, but he prefers it that way: “I hope I shall be on the radar now, but it’s good not to get the hype. It helps me stay myself,” he said.

It is quite unusual for someone as young as 13 to stick at any one thing, but his first coach Joseph found him, “very disciplined, he has a good head and knows what he wants to achieve. He is quiet, but he has guts, he has the will to win.”

Evidence of a cool head came after the Daegu final when James refused to be drawn about his chances for the London Olympics: “It is too easy to say what is going to happen next year,” he said. “But I will only say it is going to be significant.

“But whatever happens, I am just happy to be representing my country and putting Grenada on the map. That’s the most important thing.”

Meanwhile, back home in his native village of Gouyave, it is carnival time: “It is also called the village that never sleeps,” said James with a huge smile. “Back home they’ll be going crazy.”