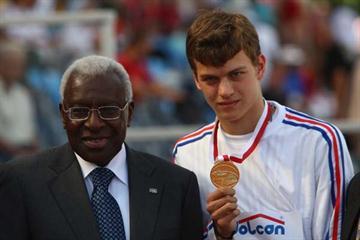 Christophe Lemaitre broke the national 100m record today (9) with 9.98sec during the French Championships which are being held this week in Valence.

On a warm (32°) and windy afternoon in Valence, a feat was keenly anticipated on the occasion of the final. The previous day, the 20-year-old had been the fastest in heats (10.15, stopping his full effort with 10m to go) and in semi final (10.05 with a below-par start). But "my coach Pierre Carraz had told me to run all through and I'm disappointed about the time," he said after the semi final.

Today, in final, he made another obvious bid to break the national record (9.99) held by Ronald Pognon since 2005.

Lemaitre, in lane 4, had a modest reaction time (0.181) but produced a irresistible acceleration from 30m to leave behind Pognon, in lane 6. Martial Mbandjock, the outsider, was one metre behind Lemaitre and maintained the gap without being able to catch him. Attention in the stadium naturally immediately switched to the clock, which indicated 9.99, corrected a few seconds later to 9.98. The anemometer showed 1.3m/s, which validated a new French record.

From among the crowd that was celebrating the feat coach Carraz was tried to describe the race of his pupil: "I didn't see much of the race. What I can say is that I feel that he didn't run with even rhythm. In Valence, he was not running as well as he was running earlier in the season. He is opening his stride too much in front and his hips are in a sitting position, which I don't like to see. Maybe it is due to the fact that he missed the 10sec barrier at several occasions."

Christophe Lemaitre looked more relieved than happy to break the mythical barrier. "This was my goal to break it of course. One has to run under 10sec in order to be part of the world's best. I will be recognised as the first white man to run it, but today is mainly historical for myself!"

"It was a long term goal, but today the conditions were good and I had the best oponents possible to push me in Martial and Ronald. The only fear I had was about the wind."

Martial Mbandjock, second in 10.08, had his first words for the winner: "I have to congratulate Christophe. This day will long be remembered as the fastest French 100m ever. We all have a contribution in this record in pushing Christophe to do it."

Ronald Pognon, third in 10.34, who lost his national mark, was also full of admiration, "records are made to be broken, I'm happy for him as he is a very talented athlete and has a lot more in him for the future."

"Now, I have a three-numbers personal best, and I can have high ambitions for the European Championships in Barcelona," said Lemaitre.

His 9.98 is the fastest time in Europe this year, 0.01 better than Dwain Chambers in his winning time during the European Team Championships in Bergen last month.

"But in Barcelona, the favourite will be Chambers, he has the experience as an advantage", predicted Carraz. "However, Christophe puts no barrier in his head, he his fresh and young, and doesn't think too much, so everything is always possible in his mind, that's why he runs so fast."

NOTE: A summary of the best of the action from the French championships will be published at their conclusion