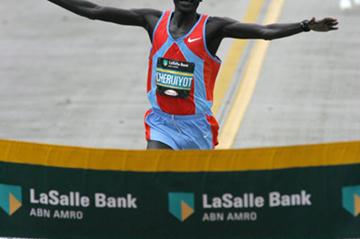 One champion finished upright and the other was prone as they crossed the finish line of the 2006 LaSalle Bank Chicago Marathon on Sunday (22).

Ethiopia's Berhane Adere won a dual with Russia's Galina Bogolomova to win the women's division by five seconds in a time of 2:20:42, while men's champion Robert Cheruiyot of Kenya was raising his arms in victory and just about to break the finish tape after outrunning countryman Daniel Njenga when his foot slipped on the sponsor logo mat that was glued to the pavement in front of the chip timing mat and he slid across the finish.

It was a frightening scene as Cheruiyot's head hit the ground first and he didn't move for several seconds as people rushed to his aid. More importantly, however, for Cheruiyot, was the fact that his torso landed over the finish line, allowing him to be officially recorded as the winner with a time of 2:07:38.

Pat Savage, the race's head referee and a USATF official, told reporters afterward that the rule is that the runner's torso has to cross the finish line, which is the front of the timing chip mat, not the finish tape. So, although there appeared to be some question as to whether or not Cheruiyot had officially finished, there was no doubt in the mind of the officials, who Savage said, do not use chip times as official.

The top 15 places are timed the old fashioned way, with stop watches, and the officials monitor the finish and stop their watches once the runner's torso "breaks the plane" of the finish line. Video replays of the fall clearly show that Cheruiyot's torso is fully on the finish mat, putting him over the line and the race winner. You can also see Njenga on the tape looking back at Cheruiyot on the ground and tossing his head back, his face reflecting an anguished look. At the post race press conference Njenga broke down and cried. During the last 800 meters of the race he tried several times to go past Cheruiyot, but could get no closer than running almost side-by-side with his taller rival.

Despite best effort, Njenga the bridesmaid yet again

First Cheruiyot had surged about 800 meters from "home," just before the pair had turned onto the short uphill train track overpass on Roosevelt Avenue, and opened a small gap. Njenga answered coming up the hill and closed the gap. "For the last 1 K I was feeling good," said Njenga. "And also when I looked at Robert, his face was tired. But I could not get by. After that I realized Robert Cheruiyot was very strong."

Perhaps that realization came down the final straight 400 meters from the finish when Njenga, running on Cheruiyot's shoulder, appeared to gather himself for an all out sprint. His arms were pumping, his face reflecting the effort, and Njenga appeared to be ready to surge past Cheruiyot, but Cheruiyot looked over at Njenga and found something more in reserve, accelerated again and left Njenga in his wake. It was a bitter defeat for Njenga, who had finished either second or third in his four previous runs in Chicago, and this year had openly declared that it was his year to win.

"Maybe I trained too hard," he said after the race, clearly distraught and attempting to come to grips with the fact that although he had done everything he could, it was not enough to defeat Cheruiyot. For a moment, he said, he even thought he had won. Cheruiyot's fall left it ambiguous as to whether or not he had officially crossed the finish line, but then he was told that he again had failed to win.

Cheruiyot to hospital with head injuries

“Cheruiyot was not sure he had won,” said his coach Dr. Gabrielle Rosa. When Rosa saw him in the medical tent, Cheruiyot asked him: "Did I win?" On the advice of race medical director, Dr. Greg Ewert, Cheruiyot was taken to Northwestern Memorial Hospital where he was given his drug test and a battery of medical tests to assess his condition, said his manager, Federico Rosa, who is also a doctor.

The initial test results were that Cheruiyot had sustained a "focal contusion and sub arachnoid hemorrhage" where his head had hit the pavement, said Federico Rosa. The decision was made by the doctors to keep Cheruiyot overnight "for observation," which is typical for head injuries. He had bleeding from a cut on his head and some bleeding inside his skull, said Federico Rosa, but no hematoma, concussion, or other potentially more serious injury, Rosa said.

There was no such drama for the women, as their race could almost be characterized as two races melded into one.

Romania's Constantina Tomescu-Dita had indicated before the race that she wanted to run a sub 2:20, just as Deena Kastor had prior to last year's race. On Sunday, she set out to execute that plan. Running with a group of men, many of whom run for the Hansons Brooks team who were attempting to run qualifying times for the US Olympic Trials, Tomescu-Dita covered the first 15K in 48:14, 5:11 per mile, not far off Paula Radcliffe's World record pace. She was through half way in 1:08:07 and had a two minute, eight second lead on the chase pack, which included Bogomolova, Adere, third place finisher Benita Johnson of Australia, Japan's Hiromi Ominami, Russia's Lyudmila Petrova, and fourth place finisher, Madai Perez Carrillo of Mexico.

No longer running with the men, Tomescu-Dita now found herself alone and feeling the effects of cold weather (39 F./4 C. at the start) and the gusty winds. She gradually slowed as the pack behind her became smaller but so did the gap between them. By 30K, Adere and Bogomolova were the chase group and they were 1:42 behind Tomescu-Dita. At 35K that gap had narrowed to 50 seconds and, more importantly, the pair could finally see the Romanian in front of them. Just past the 23 mile mark, the duo swept past her and Tomescu-Dita was unable to respond. Fearing Adere's finishing speed, Bogomolova did everything she could to attempt to break away, but to no avail.

With about a half mile to go in the race, about the same point that Cheruiyot had made his first surge near the finish, Adere picked up her tempo and quickly opened up about a 10 meter gap, which she was able to hold to the finish.

"Obviously I wanted to win, but I knew it was going to be difficult for me," said Bogomolova.

"I knew I had the speed for (the last) 2K," said Adere, and she proved it. The top four finishers in the women's race all set national records on a day that was not conducive to fast times.

"That's Chicago," said Pinkowski. "People come here to run fast times. They're oblivious to the conditions. It just shows the character of these athletes."

Growing depth for US men

Maybe the most character was shown by the 15th place finisher in the men's race, Hansons-Brooks runner, Mike Morgan, who had been run over by a bicycle while on a training run the Friday before the race, but still managed to run 2:15:11 in his first attempt at the marathon. Morgan led a parade of American men with personal bests as Abdi Abdirahman ran the second fastest time ever by an American on a record standards course of 2:08:56 in fourth place and another Hansons Brooks runner, Brian Sell improved on the PB he had set in April's Boston Marathon with a 2:10:47 effort in sixth place. In all 20 US men ran under the US trials A qualifying standard of 2:20. There were two US runners in the top ten and nine in the top 20, many representing the Hansons Brooks team, which came to the race in a large bus donated by new team sponsor, Saturn.

Cheruiyot completed a rare Boston/Chicago double with his win in the Windy City and took over the top place in the World Marathon Majors standings. Adere also jumped to the top of the standings in the WMM women's standings. The leader at the end of the competition at the end of 2007 runs away with a $500,000 first prize.

Jim Ferstle for the IAAF