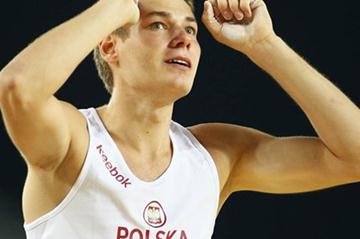 Daegu, Korea - As they sat side by side before the world media it would have been very difficult to determine which of the three vaulters had actually won the World Championship without first looking at the results. Their expressionless faces gave nothing away.

Renaud Lavillenie of France had been the clear favourite at the start of the day and could never have imagined the pair seated to his right would both clear the world leading height of 5.90m leaving him with only the bronze medal. He looked down at the table in disappointment.

The Cuban, Lazaro Borges, was likely dumbfounded he had jumped so well and still lost on the count back while the winner, Pawel Wojciechowski, appeared very uncomfortable in the limelight.

“I am scared a little bit,” the 22-year-old from Bydgoszcz, Poland admitted. “Now I must learn to live with this. I think it will be terrible.”

Wojciechowski smiled at his choice of words. He hadn’t been a World champion for more than an hour and he was pondering just how life changing the experience could be.

“I still live with my family but now I think things could change,” he reveals. “I live with my parents and my grandpa and I have an older brother. My mother works in a shop and my father is a postman, normal family things. Now I might live together with my girlfriend.”

The $60,000 USD first place prize money courtesy of the IAAF is one thing. There could be other financial bonuses also. As World champion he may command bigger pay cheques from meeting directors. And, let’s not forget that he will be celebrated widely across Poland in the tradition of other national Pole Vault heroes like 1980 Olympic champion, Wladyslaw Kozakiewicsz, for example. The worried look was also compounded by fatigue.

“I knew that I was close to winning,” he recalls. “I was so exhausted so I didn’t want to jump anymore. I wanted the competition to be over. But I still fought and at 5.95m it was really really close. I believe I can jump higher next season. Six metres, maybe. Maybe more.”

There’s much for the World champion to think about. A year ago he had a modest personal best of 5.60m but he had been touted as a potential world class vaulter ever since he captured the 2008 World Junior silver medal in his home town of Bydgoszcz. Everything clicked at the beginning of 2011 and he cleared 5.71m to finish 4th at the European Indoor Championships and also hit a huge indoor personal best with 5.86m at the Flanders Indoor meeting in Gent, Belgium. That performance broke the Polish national record held by Miroslaw Chmara for more than twenty years.

“I make training six days a week, one session a day,” he explains. “Sometimes it’s three and a half hours and sometimes it’s two hours.”

His coach Wlodzimierz Michalski explains the rapid improvement on technical changes. Together they decided to increase Wojcieshowski’s run-up from fourteen strides to sixteen during the indoor season and also started using heavier poles.

While his focus is completely on vaulting he has other interests that keep his life in check.

“I like fishing,” he says. “It relaxes me. I do this every free moment. It’s my biggest hobby. I have a big garden around the home and I go there at 3:00 am and wake up and go fishing. Sometimes I fish in the river near my home for a fish - I don’t know what it is in English. Do you know muskie? It’s smaller in Poland. I also meet every day with my girlfriend. Maybe now we can live together.”

What lies ahead is potentially more demands on his time, more competition invitations and most burdensome of all the expectation that comes with winning a World championship in a pre-Olympic year. It’s all very much for the young man.

“I really don’t know,” he says. “It’s too much for one day. I can't believe that I am World champion I can’t think now about the Olympic Games yet. I want to train like I did for today and it should be a good result.

“I know that now I can go to sleep until dawn. I cannot sleep today. I have a problem with the change in the time zones. I couldn’t sleep every night.”

Wojciechowski should sleep peacefully with his gold medal safely ensconced in his possession.