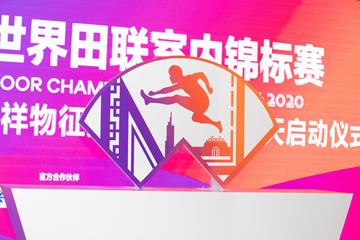 Preparations for the World Athletics Indoor Championships Nanjing 2020 stepped up a notch on Wednesday (4) as the event’s emblem and slogan were unveiled, marking 100 days to go until the sport’s next big global competition.

After receiving input from creatives around the world, the organising committee selected: ‘Nanjing’s Cube, Where Athletes Dream’ as the event slogan. The emblem, meanwhile, incorporates the Ming Dynasty City Wall and the Zifeng Building, two of Nanjing’s most iconic landmarks.

Today’s 100-day countdown ceremony marked the final stage of preparations. Nanjing’s Cube, the first professional indoor athletics arena in China built specially for the event, has been completed, while the Yangtze River Boat Complex, the official hotel for the event, will be put into trial operation on 1 January 2020.

“Sports, as a common language of mankind, serves as an important bridge connecting Nanjing and the world,” said Liu Tong, Vice Secretary General of the local organising committee and Deputy Director of Jiangsu Provincial Administration of Sports. “The World Athletics Indoor Championships Nanjing 2020 will be a gala that belongs to Nanjing, China, and the whole world. It will showcase Nanjing's image as an innovative, dynamic city of sports, and the sportsmanship of athletes all over the world.”

It will also be the most important World Athletics event of 2020 ahead of the Olympic Games in Tokyo.

The local organising committee also launched their mascot competition at today’s ceremony, inviting designs from fans all around the world.

The mascot should be a lively character, reflecting the spirit of Nanjing and the concepts of athletics. Designs should include a front view, two profile views and a back view.

The contest is open to individuals, companies and groups. Both electronic and paper submissions will be accepted. Entries close on 20 December 2019. Full rules.