Almost everything that moved in the stadium at last year’s IAAF World Championships in London was recorded by 49 high speed cameras and has now been measured and analysed as part of the largest biomechanical study in the sport’s history.

Today, the IAAF, in partnership with Leeds Beckett University, has released the results of this unique project at the IAAF Coaches Conference in Tampere.

After 12 months of intensive work, Leeds Beckett has produced 38 in-depth reports on the specific events that make up the track and field program, revealing fascinating details about the performances of the world’s best athletes.

“The reports over the three decades show how far technology and technics have come over these 30 years and give a rare insight into the evolution of biomechanical data in our sport over this time,” said IAAF President, Sebastian Coe.

“Biomechanics are crucial to the development of athletes where milli-seconds and millimetres can make the difference between qualifying for a final, or not, and winning a medal, or not. They enable athletes and coaches to perfect performances, tweak technique and more importantly understand, manage and mitigate injury,” added Coe.

“Partnering the IAAF in this project was a very exciting chapter for the Biomechanics department within the Carnegie School of Sport at Leeds Beckett University,” said Head of Department, Dr Athanassios Bissas. “It was both exciting and carried significant responsibility because of the scope of the project and capturing live data from athletes such as Usain Bolt, Mo Farah and over 700 other top athletes,” added Bissas.

“Central to our data collection protocols was the deployment of three-dimensional motion techniques to analyse all the events. The plan was to deploy as many cameras as possible per event so all key aspects are captured. For instance, we deployed 23 high-speed cameras to capture the 100m race, something unprecedented in the world of athletics, and definitely a first in terms of biomechanical sprinting analysis” said Bissas.

“We are proud of this project and feel it will be an important milestone in the development of biomechanics in athletics. We are confident that the reports will provide everyone in the sport of athletics with useful material for many years to come,” added Bissas.

Some of the highlights from this research include:

- The steeplechase, recorded in detail for the first time. We all know that clearing the barriers and landing cleanly in the water are critical in the steeplechase. But the outstanding technique of USA athletes Emma Coburn and Courtney Frerichs in the women’s 3000m steeplechase clearly showed that medals were won and lost in the water. The research showed in detail that the USA team’s effective water jump clearance techniques were key to their performances.

- The data captured on 10,000m champion Almaz Ayana shows a difference up of up to 20cm between the length of her strides from right to left (her right to left is longer than left of right), which is not easy to spot with the naked eye. Eliminating this asymmetry may not just make her faster but may help to overcome injury. The health and wellbeing of athletes is as important as their performances.

Whilst the reports will provide useful insight for coaches and athletes, it will also help the sport of innovate within the sport by providing new data and graphics that can be shared with the media and fans around the world. For example:

- We recorded the longest 110m hurdle clearance at the championships from Bronze medallist Balazs Baji – over 2 metres before the hurdle and just under 2 metres after the hurdle so a 4m hurdle, just under half the length of a world class long jump.

- And the longest measured stride during speed development in the women’s 100m final was recorded by Dafne Schippers at a pretty impressive 2.3 metres.

“These are distances that our fans understand and can marvel at.   Together with take off speeds in jumps and the speed of release in throws we can use this data to tell the stories of the enormous feats that our athletes achieve, bringing to life their extraordinary talents and enhancing our fans’ understanding, enjoyment and appreciation of our sport. We are working on some innovative ideas around graphics for our next World Championships in Doha, using biomechanical data to bring our fans closer to the action and our athletes. These are exciting times for our sport,” said Coe.

“I would like to end by saying a huge thank you to our Development Team, to Leeds Beckett University and to all the coaches that have contributed to the reports by analysing the data and providing expert opinions in each of the reports,” added Coe. 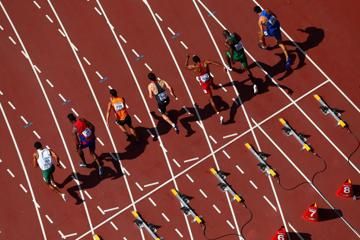 Largest ever biomechanics research project in...