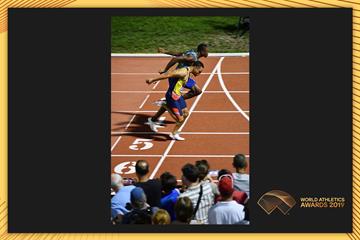 Fan photograph of the year selected

A winner has been selected in the World Athletics contest for the best photograph of the year taken by a fan photographer.

The winning entry came from Daniel Drozdowsky of Toronto, whose image of the men's 100m final at the Canadian Championships caught Aaron Brown and Andre de Grasse nearly inseparable at the line. Brown was given the nod in 10.021, a scant three thousandths of a second ahead of De Grasse.

Once a competitive 200/400m sprinter, Drozdowsky now spends his time at meets trying to catch competitors with a camera.

"I was always a runner - about six years ago I got a camera and would go to the local meets trying to take photos of the professionals and people I looked up to," Drozdowsky said. "I'm not competing now but just love the sport, which is why I go to meets and take photos."

Drozdowsky will receive travel, accommodation and tickets for two for a Diamond League meeting of his choice.