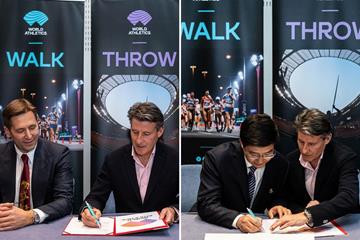 Belgrade’s Stark Arena, which seats 18,386 for sporting events, has been used for the 2009 Universiade, the Davis and Fed Cup, the World Championships in karate, and the World Cup finals in volleyball.

The Chinese city of Yangzhou has been confirmed as the host city of the 2022 World Athletics Half Marathon Championships.

Yangzhou, a city of 4.5 million people, stages an annual Gold Label half marathon. The course records of 59:52 and 1:07:21, set by Mosinet Geremew in 2015 and Peres Jepchirchir in 2016 respectively, are the fastest times ever recorded in China.

“We’re very pleased to announce that Belgrade will host the 2022 World Indoor Championships and Yangzhou will host the World Half Marathon Championships,” said Coe. “Both presentations were comprehensive and we are very excited about going there.”

The World Athletics Council announced today that the Russian Athletics Federation (RusAF) reinstatement process has been suspended, pending the resolution of the recent charges brought by the Athletics Integrity Unit.

On Thursday (21), the AIU charged RusAF with obstructing an investigation and provisionally suspended several senior federation officials for tampering and complicity.

The Taskforce, chaired by Rune Andersen, made the following recommendations that were approved by Council:

“There is an ongoing process and we have to respect that process,” said Andersen. “There are charges laid by the AIU which we need to respect, and the AIU needs to receive feedback from RusAF by 12 December. When we have the answers from the AIU on what has been going on and what the process will be, then we will convene and look at the whole structure and we will come up with recommendations to the council.”

“This is a process that has served us well,” said World Athletics President Sebastian Coe. “It is neither symbolic nor have we done it to benchmark ourselves against anything else other than we felt was absolutely the right decision for our sport. It may not make us universally popular, but it is really important that we continue with the process we began in November 2015. The recommendation that was given to us today, and unanimously accepted by the council, was in the spirit of that process. We will take this through to wherever we need to take it to protect the athletes and the sport.”