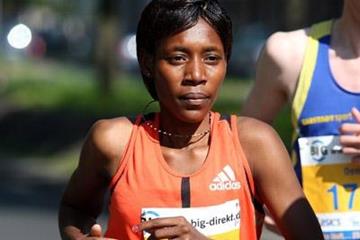 Arusei and Kangogo the favourites at Warsaw Half Marathon

Justus Kangogo and Peninah Arusei of Kenya will start as the favourites at the PZU Warsaw Half Marathon, an IAAF Bronze Label Road Race, on Sunday (26).

The half marathon in the Polish capital has already established itself as one of the country's prime road races in terms of both quantity and quality. The number of entrants in this, the race’s twelfth edition, has surpassed 15,000, making this the largest edition ever and the best attended half marathon in Poland.

The course records of 1:00:48 by Victor Kipchirchir and 1:09:06 by Pauline Njeru, both set in 2014, are the fastest times ever run on Polish soil. With the fields assembled this year, however, these performances may come under serious threat.

Arguably the most successful half marathon specialist enlisted for the race is Peninah Arusei. With a best of 1:07:48 set in Lille in 2010, she’s by far the fastest in the field. It was also in 2010 that she took bronze at the IAAF World Half Marathon Championships to add to the fifth place she took in the same event two years earlier.

Her portfolio also includes wins in prestigious races in Lisbon, Berlin, Paris and Lille and on 10 occasions in her career she broke 1:09. Now 38 years old, Arusei is still a force to be reckoned with, having run 1:09:08 last year. She has experience on Warsaw's streets as well, as last year she was the runner-up in the Orlen Warsaw Marathon in 2:29:21.

Perhaps the biggest threat to Arusei's dominance may come from Volha Mazuronak. The Belorussian may have relatively little experience in running half marathons at the top level with a personal best of just 1:11:44, set in Minsk last September, but she is now firmly established as one of the world's top marathon runners.

Having started her international career as a race walker with fourth place in the World Youth Championships in 2005, Mazuronak chose to concentrate on running as a senior. Since her breakthrough win in the Sacramento Marathon in 2014 with 2:27:33, she has continued to reach new heights. Improving to 2:25:36 at the 2015 London Marathon and 2:23:54 to place fourth at the 2016 edition of the same race, she then achieved the highlight of her career so far by taking fifth place at the Olympic Games in Rio.

Mazuronak is also one of two previous winners of the PZU Warsaw Half Marathon to run the race this year. In 2012 she won in 1:14:25, a time she is likely to better by a significant margin this time.

Alice Mogire of Kenya is the second fastest woman in the field with 1:09:57 from 2012, a year in which she won in Reading, Gaia and Valencia. More recently, she finished second in Warsaw last year in 1:13:15.

Completing the Kenyan challenge are Hellen Musyoka with a best of 1:10:50, fourth in Warsaw three years ago, and Damaris Kemunto, a 1:11:32 runner.

Of the three Ethiopian women in the elite field, the one most likely to feature is Ayantu Gemechu, winner in Bejaia last year with 1:11:00.

Olga Ochal will be the the leading Polish contender. The winner of this race and the national champion in 2013, she has a career best of 1:12:47 dating back to 2012.

Mesfin Alemu of Ethiopia is the other runner in the lineup who has broken the one-hour mark. He, too, achieved this feat in Ostia, finishing second in 2014 with 59:39. His form, however, is a bit more difficult to gauge, due to lack of recent results.

The next fastest man on paper is a second Kenyan, John Loitang. His best of 1:00:16 came four years ago, when he placed fourth in Prague. A year later, he won in Casablanca and was the runner-up in Paris, while in 2015 he took second in Warsaw in 1:01:17.

Also among the leading runners is Hillary Maiyo, the Kenyan two-time winner of the Gdynia Half Marathon. He set his personal best of 1:02:41 while taking the first of those victories in 2016; he took the second one with 1:02:55 just last weekend.

Fernando Cabada is possibly the best of the non-Africans on the entry list, with a 1:02:00 best from 2014 and a history of participation in world championships in both half marathon and marathon.

The top Polish participant is Yared Shegumo, European Championships silver medalist in the marathon from 2014 and runner-up in the 2012 edition of the Warsaw Half Marathon. Shegumo struggled with an injury for much of 2016, but returned in September to finish sixth in the Warsaw Marathon. This will be his first race since then, and if his comeback to form continues, he may be able to challenge his best of 1:03:42 set in Warsaw in 2013.

Pavel Jackowski for the IAAF