Thirteen meetings down, one to go. The IAAF Diamond League has travelled to 10 different countries in 2015 and the first 16 Diamond Race champions were crowned last week in Zurich. The remaining 16 will be decided at the second of the two finals in Brussels on Friday (11).

Zurich’s Weltklasse and Brussels’ AG Insurance Memorial Van Damme are the only meetings in this year’s series to be held this side of the IAAF World Championships, Beijing 2015. Adding an extra dimension to both competitions, not only are Diamond Race trophies and US $40,000 on the line, but each discipline acts as something of a World Championships rematch.

Or, in the case of the women’s 200m, the race that fans never got to see in Beijing.

The women’s half-lap sprint will be one of the most eagerly anticipated events of the night as Olympic champion Allyson Felix takes on world champion Dafne Schippers. Felix didn’t contest the 200m in Beijing, choosing instead to focus on the 400m, which she duly won. Schippers, meanwhile, clocked a European record of 21.63 – faster than Felix’s lifetime best – to win the 200m.

They have competed against one another four times in the past. Schippers finished ahead of Felix in Glasgow and Zurich last year, but the US sprinter gained revenge in Brussels last year and again in Lausanne earlier this summer, bringing their head-to-head record to 2-2.

Felix leads the Diamond Race standings by one point and will be keen to claim her first Diamond Trophy since 2010. Schippers trails Felix by six points, but will need Felix to finish lower than third and Jeneba Tarmoh to finish out of the top two in order to win the Diamond Race.

One of the other big clashes of the meeting will be in the men’s triple jump where world champion Christian Taylor faces arch rival and Diamond Race leader Pedro Pablo Pichardo.

The two athletes have been pivotal in making 2015 the year of the jumps, regularly threatening – and even surpassing – the 18-metre barrier, making the Brussels meeting record of 17.60m look extremely vulnerable. With three wins each so far this year, whoever finishes ahead of the other in Brussels will claim the Diamond Race.

Several other events are nail-bitingly close in the Diamond Race standings coming into Brussels.

The men’s shot put couldn’t be closer. World champion Joe Kovacs and two-time world champion David Storl each have 14 points from three victories. Put simply, whoever finishes ahead in Brussels will take the Diamond Trophy.

World leader Kovacs hasn’t competed since winning in Beijing with 21.93m. Storl, meanwhile, has been beaten in his three most recent competitions. World bronze medallist O’Dayne Richards and Oceanian record-holder Tom Walsh will also be in the Belgian capital.

There is a three-way tie at the top of the women’s 100m hurdles Diamond Race. Dawn Harper Nelson, Sharika Nelvis and Jasmin Stowers have won two Diamond League meetings apiece. As with the men’s shot, the athlete who finishes highest in Brussels will secure the Diamond Race title.

Even in their three-way head-to-head-to-head record this year, they are tied, making their clash in Brussels impossible to call. Harper Nelson recently beat Nelvis in Berlin, while Stowers battled a strong headwind to win in Padua last weekend.

The most open event in Brussels, at least in terms of the Diamond Race, is the men’s 5000m. Essentially, the winner on Friday will also take the series title in a race where world silver medallist Caleb Ndiku takes on world bronze medallist Hagos Gebrhiwet and world junior champion Yomif Kejelcha.

European champion Sifan Hassan comfortably leads the 1500m Diamond Race and in Brussels the women’s middle-distance event will be the mile.

The 22-year-old Dutch runner faces 2011 world champion Jenny Simpson, 2013 world champion Abeba Aregawi, world silver medallist Faith Kipyegon and world junior champion Dawit Seyaum, in what is being billed as an attempt on the world record of 4:12.56, set by Russia's Svetlana Masterkova in 1996.

Kiprop has dominated the 1500m this year, but it will be fascinating to see how he copes against the 800m specialists. Amos, meanwhile, will need to finish in the top three to secure the Diamond Race title.

The men’s pole vault is similarly loaded and contains four of the five medallists from the World Championships. World champion Shawn Barber will be contesting his 31st competition of 2015; he has only been beaten five times this year, but so too has world record-holder Renaud Lavillenie.

The Olympic champion leads the Diamond Race and is on course to maintain his record of being the only athlete in the world to have won the Diamond Race every year since its inception in 2010. Only world indoor champion Konstadinos Filippidis can potentially prevent Lavillenie lifting the Diamond trophy.

Like Lavillenie, Tunisia’s Habiba Ghribi was disappointed not to come away with the gold medal from Beijing. In Brussels, the world and Olympic steeplechase silver medallist will take on the woman who beat her in Beijing, Hyvin Jepkemoi, as well as Diamond Race leader Virginia Nyambura, who needs to finish in the top three to take the series victory.

After producing the best one-day sprint double in history in Brussels last year, world silver medallist Justin Gatlin is once again entered in both the 100m and 200m. He has a seven-point lead in the 100m Diamond Race and looks to be on course to retain his title.

The longer sprint in Brussels isn’t a Diamond Race event and was hit by the recent withdrawal of Usain Bolt, but Gatlin will still line up alongside a world champion as he takes on Beijing 400m winner Wayde van Niekerk.

The men’s javelin in Brussels contains seven of the top eight finishers at the World Championships, including the three medallists, Julius Yego, Ihab Abdelrahman and Tero Pitkamaki. This will be Yego’s first competition since producing the farthest throw in 14 years, 92.72m, to win in Beijing.

But only Pitkamaki and 2013 world champion Vitezslav Vesely are in contention to win the Diamond Race. Vesely has a six-point victory, but has been struggling for form, which could potentially clear the way for Pitkamaki to steal a late series victory.

Kenyan 400m hurdler Nicholas Bett was the only track and field winner in Beijing never to have competed at an IAAF Diamond League event. He will make his series debut in Brussels when he takes on the likes of Bershawn Jackson and Johnny Dutch, both of whom will want to make up for missing out on the World Championships final.

Diamond Race leader Francenca McCorory missed out on an individual spot altogether at the World Championships, but in Brussels the US 400m runner will be able to test herself against the likes of world silver medallist Shaunae Miller, Commonwealth champion Stephenie Ann McPherson and fellow Jamaican Novlene Williams-Mills, who overtook McCorory in the closing stages of the 4x400m in Beijing.

Of the 16 Diamond Race disciplines being held in Brussels, just two have a guaranteed winner whose leads are so great that they need only to start in their event to secure the trophy.

Olympic discus champion Sandra Perkovic, fresh from a 69.88m victory in Zagreb on Tuesday, has an unbeatable 15-point lead. That’s not to say she’ll be lacking motivation, though, as she’ll be competing against the two women who have defeated her this year: Denia Caballero, who beat Perkovic to the world title in Beijing, and fellow Cuban Yaimi Perez, who won in Lausanne in July.

World triple jump champion Caterine Ibarguen is the third athlete with an unassailable lead in the Diamond Race. Her triumph at the World Championships was her 29th consecutive win, so the Colombian will be hoping to end her summer season with a nice round 30. 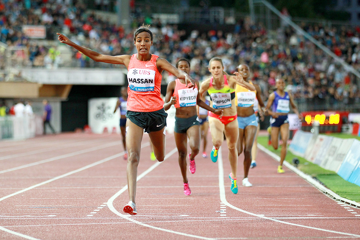 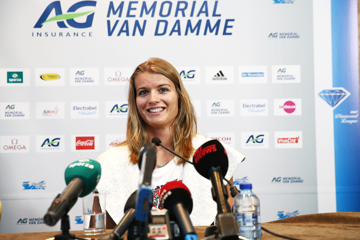