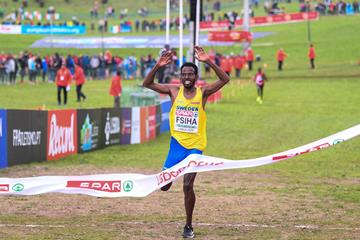 Girma and Chelimo the favourites at the Campaccio cross country

Ethiopia’s Lamecha Girma and the three medallists from the European Cross Country Championships head the men’s field at the 63rd edition of the Campaccio in San Giorgio su Legnano, Italy, a World Athletics Cross Country Permit meeting, on 6 January. Kenya’s Margaret Chelimo Kipkemboi leads the field in the women’s race.

The men’s line-up will live up to the tradition of the northern Italian event. Girma, who was born in 2000, clocked an Ethiopian record 8:01.36 in the 3000m steeplechase at the World Championships last year, finishing just 0.01 behind winner Conseslus Kipruto.

Another Ethiopian teenager in the field is 17-year-old Tadese Worku, who took silver in the U20 race at the World Cross Country Championships last year and won the Giro di Castelbuono road race in July.

The top Kenyan runner in the field is Robert Keter, who set the 5km world record in Lille in November clocking 13:22.

Kaya won European cross country silver to complete the full set of medals at the continental level following gold in Chia in 2016 and bronze in Tilburg two years later. Kaya also won European silver in the 3000m steeplechase in 2016.

Crippa will lead the home course challenge. Crippa finished eighth in the 10,000m at the World Championships last year, breaking the national record with 27:10.76. The 23-year-old star capped the year with his first individual senior bronze medal at the European cross. Crippa finished fifth at the Boclassic in Bolzano on New Year’s Eve.

Crippa will face his close friend Yohannes Chiappinelli, who won the European 3000m steeplechase bronze in 2018 and finished fifth in the U23 race at December’s European Cross Country Championships contributing to Italy’s team silver.

Also returning is Sara Dossena, who was fifth last year. The 34-year-old, who was sixth at the 2017 New York Marathon and at the 2018 European Championships, improved her marathon PB to 2:24:00 in Nagoya last March.

Valeria Roffino, who finished 11th at the European Cross Country Championships and reigning world U20 mountain running champion Angela Mattevi are other Italian hopefuls in the race.