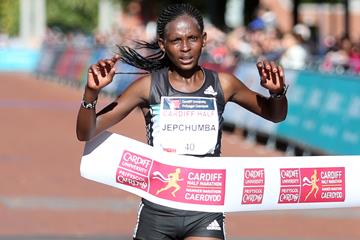 Violah Jepchumba and Shadrack Kimining will defend their Cardiff University/Cardiff Half Marathon titles this Sunday (1 October) against stellar fields at the IAAF Silver Label road race in the Welsh capital.

Memories are fresh in the mind of an epic race on virtually the same course at the IAAF World Half Marathon Championships in 2016. On that occasion, Geoffrey Kamworor recovered from a start-line fall to take victory, while Mo Farah had to settle for the bronze medal.

Apart from on that day, Wales has arguably never seen such a fine line-up as the one assembled for the 15th edition of this race on Sunday.

Since winning in Cardiff last year in a course record of 1:08:13, Bahrain’s Jepchumba has become the fifth quickest ever at the distance. In Prague in April, her 1:05:22 left her 30 seconds behind Joyciline Jepkosgei’s world record after going through 10 kilometres in a remarkable 30:05.

In fact, the Kenyan-born athlete’s 1:06:06 to win in Usti Nad Labem just two weeks ago is only her third quickest for the distance as she also ran 1:05:51 to win in Prague in 2016. Her CV boasts nine sub-70-minute clockings.

The 26-year-old could confirm herself as one of the most exciting women’s endurance prospects in the world with victory in Cardiff, especially if she succeeds in going with the lead pacemaker at a planned 1:05:50.

“I’m happy to come back to Cardiff to defend my title,” said Jepchumba. “I have good memories of last year and I go for the same result as in 2016.”

However, if she is still feeling the effects of her exploits in the Czech Republic, Edith Chelimo could be the most likely to capitalise. The Kenyan was second in the Berlin Half Marathon earlier this year in a PB of 1:08:57 and was fourth at the African Cross Country Championships in 2014.

The other sub-70-minute athlete is Kenya’s Beatrice Mutai, whose best of 1:09:30 came when she was third in Valencia in 2013. She confirmed recent form with a fourth-place finish over 10,000m at the Kenyan Championships this year.

Showing more recent good shape has been Kenya’s Dorcas Kimeli, who won the Swansea Bay 10km in 32:14. Caroline Nyaga finished second in Swansea and is also making the 20-mile trip down the road. Both will be making their debut over the half marathon.

Nineteen-year-old Ethiopian Zeineba Yimer, who was 10th in the junior race at the World Cross Country Championships this year, will be looking to make further advancements following her 1:13:17 in Nanning 10 months ago.

Caryl Jones, who finished 10th at the 2012 World Half Marathon Championships and has a PB of 1:11:18, leads the domestic entries and is joined by Jenny Nesbitt and Elinor Kirk.

The contest for the £2500 first prize in the men’s race would seem to be more open, with a few capable of going with the 59:50 pace requested. Kimining was something of an unknown when he arrived in Cardiff last year for his first race outside Kenya. He caused a shock in setting the course record of 1:00:53 but since then has improved his PB to 1:00:07 when finishing seventh in Ras Al-Khaimah. The 21-year-old has also recorded three other 61-minute half marathons this year.

The fastest in the field on paper, however, is his compatriot Wilfred Murgor, who recorded 59:57 when second in Prague in 2015. He also has a 2:09:37 marathon to his name.

John Lotiang, whose PB of 1:00:16 came when he finished third in Prague in 2013, is also in the field. He also won the Warsaw Half Marathon earlier this year and missed his PB by 23 seconds in Gothenburg.

Another Kenyan, Josphat Bett, was the world junior 10,000m champion in 2008 and more recently was Commonwealth silver medallist at the distance three years ago. He has a good pedigree on the roads, too, with a 1:01:01 PB.

Morocco’s Moussab Haddout will be another contender, having run 1:00:19. Last year’s Seville Half winner was second over the same distance in Madrid this spring.

Hiskel Tewelde is among the most experienced in the field. He represented Eritrea on the track at this year’s World Championships and at last year’s Olympics and the man with a PB of 1:00:29 was 17th when the World Half was in Cardiff.

Dewi Griffiths leads the home challenge three weeks after his 1:02:53 PB for seventh at the Great North Run. “I’m hoping for another personal best this weekend – that’s what I’ll be going for,” said the Welshman. “I’m running fast times and I’ve been progressing well, so why not, we’ll see what happens. This is my fifth year running the Cardiff Half and it’s been massive for me. I can measure myself against some of the best runners in the world.”

Other Brits looking to feature are Ben Connor, Charlie Hulson and Josh Griffiths, who competed in the marathon at the World Championships this year.

A record 25,000 runners will set out from the start at Cardiff Castle, making it Britain’s third largest race behind the London Marathon and Great North Run. The course, which has a total elevation gain of 81 metres, features just a couple of minor differences compared to the one used for the World Half in 2016.