Cheyech is the prohibitive favorite. Not only is she the defending champion, but arrives on the heels of a fourth place finish at the IAAF World Championships London 2017. The 2014 Commonwealth champion, Cheyech has a personal best of 2:21:22 set at the 2017 Paris Marathon. Last year Cheyech clocked a 2:23:18 Saitama course record.

Shitaye Eshete Habtegebrel of Bahrain is another runner who is endowed with superior track speed.  She was sixth at 10,000m in the 2011 and 2013 World Championships as well as the 2012 Olympic Games where she produced her 10,000m best of 30:47.25. Although her marathon best is a relatively modest 2:25:36 recorded in Dubai in 2016 Dubai, her track speed suggests she should be able to run much faster. Will that be in Saitama?

Other invited runners from abroad include Charlotte Purdue of Great Britain who set her 2:29:23 best at this year’s London Marathon; Pole Monika Stefanowicz, who has a 2:28:26 best from the 2016 Hamburg Marathon; and Sinead Diver of Australia, who clocked 2:31:37 in Nagoya this year.

Only two Japanese – Reia Iwade and Kaori Yoshida – are among the invited elites. Yoshida was second in Saitama two years ago and recorded her 2:28:24 personal best in Nagoya this year. Domestic entries are limited because the Japanese corporate team women’s ekiden championships are scheduled o take place in two weeks time.

The Japanese marathon scene is not what it used to be. Japanese runners have not won an Olympic medal since 2004. Since 2009, Japanese women have won only one global championships medal - bronze by Kayoko Fukushi at the 2013 World Championships. The country is seeking a new star -- and it may be the 22-year-old Iwade. In 2013, she clocked the national U20 half marathon record of 1:09:45 and the following year ran 2:27:21 at the Yokoham Women’s Marathon, the fastest by a teenager. She set her marathon best of 2:24:38 in Nagoya in 2016.

“Even if Cheyech goes off with very fast pace, I will try to stay with her as long as I can,” Iwade told Nihon TV. “I want to run 2:20 for the marathon, but more importantly, I want to be the runner who can win the big one.”

Note that both the Yokohama Women’s Marathon’s course record of 2:23:07 and Tokyo Women’s Marathon record of 2:21:37, set by Lydia Cheromei and 2004 Olympic Champion Mizuki Noguchi, respectively, are faster that Saitama’s. With a stronger personal best, Cheyech has a chance to go faster than Noguchi’s mark. However, the Saitama course is quite challenging because it is unusually undulating for a Japanese marathon course. 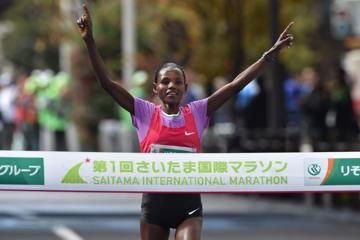 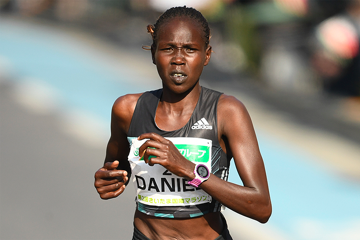