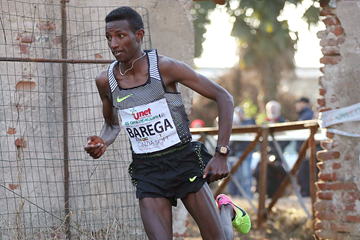 The Cross Internacional de Itálica in Santiponce on the outskirts of the Spanish city of Seville – the third Spanish leg of the current IAAF Cross Country Permit series – always boasts a mouth-watering line-up, and this year’s race on Sunday (21) is no exception.

The event will act as a rematch from last weekend’s IAAF Cross Country Permit meeting in Elgoibar as most of the top finishers from there will also be in contention.

Ethiopian sensation Selemon Barega, who will turn 18 on the eve of the competition, remains undefeated so far this cross-country season. The world U20 5000m champion will again face Uganda’s rising star Jacob Kiplimo, who had to settle for second behind Barega in Venta de Baños and Elgoibar.

But world U20 cross-country champion Kiplimo may not be Barega’s toughest rival as Joshua Cheptegei is also entered for Sunday’s 11.075km race.

Cheptegei has shown fine form this winter, winning over 10km in Durban in 27:29 and at 15km in Nijmegen in 41:16, just three seconds outside the world record for the distance.

Kenya’s Leonard Komon, the holder of the world 10km and 15km records, will also be racing on Sunday after a disappointing 15th-place finish in Elgoibar. He will be joined by fellow Kenyan Conseslus Kipruto, although the world and Olympic steeplechase champion seemed to be far from his best fitness in Elgoibar.

The British tandem of Mahamed Mahamed and Alex Teuten should also be in the hunt for a top-10 place, as should Argentina’s Federico Bruno, who set a 10km PB of 28:56 in Madrid on 31 December.

The women’s 8.265km event offers the full Elgoibar podium in the guise of Bahrain’s Ruth Jebet and the Kenyan pair of Agnes Tirop plus Llian Rengeruk.

Meanwhile Rengeruk will be eager to avenge her Elgoibar defeat, having settled for third place after losing one of her shoes in the mud.

However, none of them has a guaranteed spot on Sunday’s podium as Kenya’s world 5000m champion Hellen Obiri will be on show too.

The 28-year-old enjoyed a memorable 2017, setting a Kenyan 5000m record of 14:18:37 in Rome before winning the world title in London. Obiri recently had to settle for fourth in San Giorgio Su Legnano but won in Nairobi last Friday, beating world half marathon record-holder Joyciline Jepkosgei.

Spain’s Trihas Gebre finished fifth in Elgoibar and will aim to be the first European runner on Sunday, but she will face in-form compatriot Nuria Lugueros, who finished fifth in Edinburgh last weekend. Ines Monteiro, who recently won the Portuguese 10km title in 33:37, will also be in action, as will European half marathon champion Sara Moreira and compatriot Salome Rocha, a 2:27:08 marathon performer.

Rebecca Murray, who finished 42nd at the 2017 World Cross Country Championships, will likely be the top Briton. She will be joined by Faye Fullerton, who clocked 33:28 over 10km two weeks ago, and Verity Ockenden, who finished eighth in Edinburgh.

Weather forecasters predict a pleasant sunny early afternoon on Sunday with the thermometer about 15-17C and no chance of rain.