Barega and Jebet triumph in Elgoibar

In doing so, both winners remain unbeaten in this winter season. While the 17-year-old Barega got rid of Kiplimo only in the closing 500 metres, Olympic steeplechase champion Jebet secured her win over Kenya’s 2015 world cross-country champion Agnes Tirop midway through the last lap.

Held on a rainy early afternoon over a muddy circuit, the men’s 10.8km race kicked off at a frantic pace set by world U20 5000m champion Barega, who covered the opening 400m lap on the track in a more-than-brisk 1:01. Only his young compatriot Abadi Hadis, Kiplimo and Spain’s Illias Fifa managed to run close while Kenya’s world and Olympic steeplechase champion Conseslus Kiptuto was a distant 10th.

Barega slowed his rhythm down in the following kilometres to let Toroitich join the head while Fifa lost contact with the main group. It meant the lead quartet comprised Barega, Kiplimo, Hadis and Toroitich while the chasing group included Kipruto plus the Spanish trio of Toni Abadía, Javier Guerra and Fifa.

Ugandan prodigy Kiplimo made most of the pacing duties with Barega always closest behind him. The world U20 champion gradually increased his speed (6:43 and 6:40 for the successive 2.1-kilometre loops) but his pursuers managed to live his pace with relative ease.

Kiplimo’s penultimate lap of 6:30 paid dividends as first Toroitich and later Hadis lost ground and so the race became a replay of the recent Venta de Baños meeting where the two teenagers fiercely fought until the tape with Barega getting the better of Kiplimo in a thrilling final sprint.

At the bell, the leaders had built a 13-second margin on Hadis, himself another five seconds ahead of Toroitich while the chasing group of Fifa, Kipruto and Abadía were more than a minute adrift.

On the final circuit, world U20 cross-country champion Kiplimo tried in vain to drop Barega, but the pair entered the final stages virtually even. Barega eventually outsprinted Kiplimo to become the first Ethiopian to win since 2009 when Ayeleh Abshero took the spoils.

Hadis was a lonely third, half a minute behind while Kipruto came fifth after a close finish with Fifa but nearly two minutes behind the winner.

“The race was not easy because of the rain but I felt very good and could give back to Ethiopia the Elgoibar title,” said Barega, who will next race in Seville on Sunday, one day after his 18th birthday.

When asked about who is his favourite Ethiopian athlete between Haile Gebrselassie and Kenenisa Beleke, Barega laughed. “Both,” he said. “But I thinkHaile was an incredibly intelligent competitor.”

The women’s event opened at a moderate pace and by the third kilometre there was still a leading quintet comprising the Kenyan duo of Lilian Rengeruk and Agnes Tirop, Bahrain’s Ruth Jebet, Spain’s Trihas Gebre and Ethiopia’s Gebeyanesh Ayele, a late addition to the field.

Gebre was the first to be dropped from the main pack. Shortly afterwards Ayele was also unable to live with the other leaders.

Determined to improve on her runner-up spot from last year, Jebet pushed hard from midway onwards. World cross-country bronze medallist Rengeruk also lost one shoe in the mud and was forced to run partially barefoot for the rest of the race.

Going into the final lap, Jebet led by three seconds over Tirop with Rengeruk another 14 seconds in arrears but the world steeplechase record-holder founded an extra gear on the closing lap to easily break away from Tirop.

Eleven seconds separated the two athletes at the finish. Rengeruk crossed the line 53 seconds behind but was rewarded with a resounding applause from the knowledgeable Elgoibar crowd.

“I knew it was going to be a tough race because of the weather,” said 21-year-old Jebet. “I’m delighted with my win as last year I had to settle for second.”

Despite her fifth-place at the World Championships, Jebet was the fastest steeplechaser in the world in 2018. “I was sick in London and could not perform at 100%,” said Jebet, who also plans to compete in Seville next week.

The next IAAF Cross Country Permit meeting will be the Cross Internacional de Itálica in Seville on Sunday 21 January. 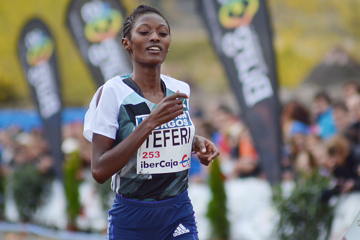 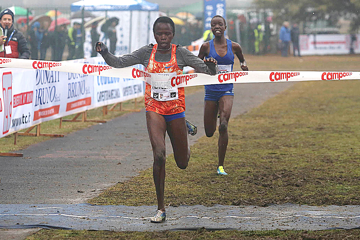