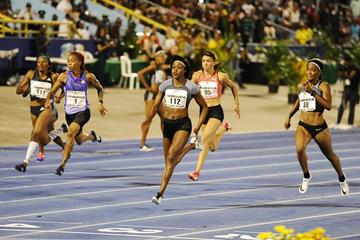 Thompson the headline act in Kingston

Double Olympic champion Elaine Thompson headlines a galaxy of stars competing at the 14th staging of the Jamaica International Invitational on Saturday (20), the first meeting of the 2017 IAAF World Challenge.

Thompson, the fastest 100m/200m sprinter last season, has continued her rich vein of form this year, showing her challengers a clean pair of heels. Her recent exploits on the Asian legs of the IAAF Diamond League series, in Doha and Shanghai, winning the 200m (22.19) and 100m (10.78) respectively by daylight, shows she’s currently in a different time zone. On Saturday she competes in the women’s 200m, the final event, with her stiffest challenge perhaps coming from the breeze.

Thompson’s MVP teammate Shericka Jackson, the world and Olympic 400m bronze medallist, has looked strong in the shorter sprints this season, improving her personal bests in the 100m (11.24) and 200m (22.57). Jackson will relish the challenge of going faster in the half-lap event. Simone Facey and Jura Levy complete the Jamaican quartet in this field.

De Grasse vs Merritt in the 200m

Triple Olympic medallist Andre De Grasse will race for the first time in Jamaica in the men’s 200m. The Canadian, who collected silver in the 200m behind Usain Bolt in Rio, is searching for his first win this season. His shocking fifth-place finish in the men’s 100m (10.21) at the IAAF Diamond League opener in Doha was almost classified as fake news. Twelve days later in Guadeloupe, De Grasse, who only started training in January after finishing his Bachelor's degree, ran a season’s best of 10.10.

He will confront LaShawn Merritt, who topped last year’s 200m world list. It will be Merritt’s third 200m outing this season. The two-time world and Olympic 400m champion is coming off a morale-boosting 400m victory (44.99) in Guadeloupe after back-to-back losses in Doha and Shanghai.

It won’t be a two-man race, though, as 2013 world silver and 2012 Olympic bronze medallist Warren Weir is also entered. Nickel Ashmeade, a semi-finalist in Rio, Great Britain’s Zharnel Hughes and Commonwealth champion Rasheed Dwyer will also add spice to this epic encounter.

Legendary US sprinter Allyson Felix makes her third visit to Kingston in five years. Interestingly, the 2012 Olympic champion and three-time world champion has never tasted victory here. On previous trips in 2013 and 2015 she placed no higher than third in the 100m. Felix is again entered in the 100m, her first race in that event for two years.

Jamaica's 2011 world champion Yohan Blake will be looking for a confidence-boosting run in the 100m. USA's Mike Rodgers, fresh from his win in Guadeloupe, and compatriot Ronnie Baker, the only man in the field under 10 seconds this season, are potential spoilers. Jamaican-born Turkish sprinter Jak Ali Harvey, Kemar-Bailey Cole, Nesta Carter and Julian Forte will also face the starter.

The men’s 400m looks enticing with Jamaica’s domestic champion Javon Francis being hard pressed to defend home turf. Francis, who ran faster than 45 seconds six times last season, will square off against USA's Tony McQuay, a consistent member of the 44-second club. The Olympic 4x400m gold medallist, who was shut out of a podium spot on his last visit to Kingston three years ago, demonstrated decent form in his IAAF Diamond League opener in Doha, clinching third spot in a season’s best of 44.92.

One man who could raise eyebrows is emerging 24-year-old Demish Gaye, the third fastest Jamaican quarter-miler this season. On 6 May the two-time inter-collegiate champion clocked 44.85, chopping almost four-tenths of a second off his previous 45.24 PB set a month earlier. Gaye was impressive at the IAAF World Relays, helping his team to 4x400m bronze. Rusheen McDonald, the Jamaican record-holder (43.93), Fitzroy Dunkley, who anchored Jamaica to 4x400m victory at the recent Penn Relays, and 2011 world bronze medallist Kevin Borlee of Belgium complete this competitive line-up.

A fierce contest looms in the women’s section as it features an all Jamaica versus USA clash. Natasha Hastings, Ashley Spencer, Courtney Okolo and Phyllis Francis will lock horns with Novlene Williams-Mills, Stephenie Ann McPherson, Christine Day and Anneisha McLaughlin-Whilby.

More US vs Jamaica in the sprint hurdles

The battle for supremacy spills over in the sprint hurdles as US athletes seek to maintain their dominance over the Jamaicans.

US champion Devon Allen, who finished fifth in the men’s 110m hurdles final in Rio, will want to open his debut performance in Jamaica with victory. Allen, along with teammates Ronnie Ash and last year’s winner Jarrett Eaton, will match strides against Jamaican trio Tyler Mason, the national junior record-holder, and Olympic semi-finalists Andrew Riley and Deuce Carter.

Bershawn Jackson literally stands head and shoulders below his opponents at the start of any 400m hurdles race, but whatever he lacks in height he makes up for in speed and tenacity. Jackson annihilated a world-class field which included Olympic champion Kerron Clement at last Saturday’s IAAF Shanghai Diamond League meeting en route to a 48.63 meeting record.

The 34-year-old US hurdler is in his swansong season and definitely looking to sign off his Jamaican chapter with a memorable victory. He won’t be granted any favours though as Michael Tinsley, a double world and Olympic silver medallist, Puerto Rico’s Javier Culson, two-time world silver and Olympic bronze medallist and two-time world U20 champion Jaheel Hyde will prove to be his greatest obstacles.

Ibarguen primed for her season’s debut

World and Olympic triple jump champion Caterine Ibarguen will make her season debut. The confident Colombian, one of two women to sail beyond 15 metres last year, will have her meeting record (14.87m) set two years ago in her sights. Jamaica’s Shanieka Thomas-Ricketts, currently ranked among the top 10 on the world list, could make it a riveting contest in the sand pit.

Olympic bronze medallist Sam Kendricks starts as favourite in the men’s pole vault. After a pair of impressive victories at the Drake Relays (5.80m) and in Shanghai (5.88m), the US vaulter could erase Brad Walker’s meeting record of 5.60m set in 2015. Kendricks’ greatest challenge should come from world champion Shawn Barber.