Bahamian sprint star Shaunae Miller produced arguably the top performance of the IAAF World Challenge meeting in Kingston, Jamaica, when she sped to a 200m time of 22.14 on Saturday (7).

It would have equalled her personal best and the meeting record, which she achieved a year ago at the same venue, but for a slightly over-the-limit wind reading of 2.2 metres-per second.

She was briefly challenged by USA's Candyce McGrone on the curve however her superior speed endurance made a huge difference in the home straight as she pulled away to win by over half-a-second.

Anneisha McLaughlin-Whilby came through to finish second in 22.79, just 0.01 ahead of USA’s Shalonda Solomon.

Thompson ran impressively shifting gears after getting a great start to dismiss the spirited challenge of American sprinter English Gardner to win this event for the second year in a row.

Her performance had an immediate shock and awe effect as her flash time of 10.71, with Gardner second in 10.85, had the crowd in a frenzy before the 2.4mps wind reading brought a modicum of disappointment.

For the men’s event, the wind had turned into a breeze and St Kitts’ evergreen Kim Collins, who turned 40 recently, captured the crowd’s early attention with his trademark burst of speed over the first 60 metres.

However, the field caught up with Collins at that point and Jamaica’s Julian Forte seized the moment and was on the verge of a major upset before Kemar Bailey-Cole and USA’s Mike Rodgers ran him down.

The gusting winds also affected the timings in the women’s 100m hurdles. 2013 world champion Brianna Rollins got away quickest and led the pack until midway before her successor and 2015 world champion Danielle Williams started to peg her back.

In the women’s 1500m, US teenager Alexa Efraimson was a convincing winner and ran the fastest U20 time in the world this year with 4:08.23, making her a clear prospect for a medal at the IAAF World U20 Championships Bydgozscz 2016.

Both the 400m hurdles were entertaining affairs.

Janieve Russell impressed in the women’s race and stopped the clock in 54.61, the second fastest time in the world at this early stage of the season, with fellow Jamaican Ristananna Tracey second in 55.31.

Former world champion Bershawn Jackson, the 2015 Diamond Race winner, had to settle for third in the men’s race as he was upstaged by the emerging Jeffrey Gibson from The Bahamas and Jamaica’s 2014 world junior champion Jaheel Hyde.

The 19-year-old Hyde, running from lane seven, quickly showed that he meant business and wasn’t overawed by the occasion. He led Jackson and Gibson in a three-way battle coming into the home straight before the 2015 world championships bronze medallist Gibson caught him at the final hurdle with a late surge.

In the field, an enthralling contest took place in the women’s hammer throw which was part of the IAAF Hammer Throw Challenge.

Current world leader Gwen Berry emerged victorious after the American’s best throw of 73.82m could not be matched by her rivals.

Her compatriot Amber Campbell was the first woman over 70 metres when she reached 70.24m in the first round. Unfortunately, she fouled her next three attempts.

British record-holder Sophie Hitchon fouled her first two attempts but went into second place in the third round with 70.65m.

However, this was short-lived as Jeneva McCall-Stevens then claimed second spot with her last effort of 71.06m.

There was also a 1-2 finish for USA in the women’s shot put with Brittany Smith reaching 18.41m defeating McCall-Stevens by 34 centimetres. It was the second runners-up spot for Stephens during the afternoon as she had competed in the women’s hammer throw five hours earlier.

The men’s and women’s 400m brought the curtains down on the meeting.

Jamaica’s Javon Francis showed his customary never-say-die attitude to win in a season’s best 44.85, his first sub-45 clocking this season. Following him home was USA’s Vernon Norwood in 45.00 and Belgium’s Kevin Borlee in 45.17.

USA’s 2015 Diamond Race winner Francena McCorory ran a controlled first 300 metres before producing a late burst of speed to overhaul her opponents and claim victory in the women’s 400m in 50.52.

It was Jamaica’s Stephenie Ann McPherson who made all the running initially.

However, she faded in the last 50 metres as teammate Novelene Williams-Mills came through behind McCorory for second in 50.87 with McPherson third in 51.20.

BACK
Pages related to this articleAthletes
Jeffery Gibson 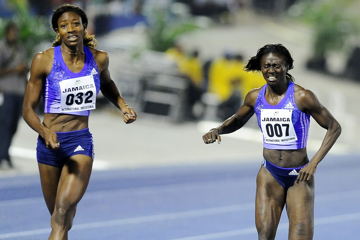