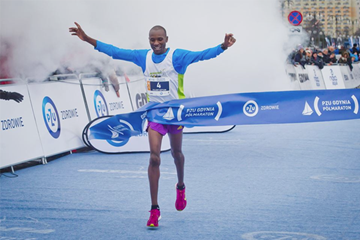 Maiyo and Oigo return to Gdynia Half Marathon

This year’s edition took on new significance after Gdynia was chosen to host the 2020 IAAF World Half Marathon Championships. A field of nearly 7000 runners will be headed by a strong international elite group, featuring both familiar and new names.

The race may not have a long history, but Maiyo has already become a repeat winner, taking victories in both 2016 and 2017, the former in a course record of 1:02:41. In recent years, the Kenyan has raced prolifically in Poland, with more than a dozen half marathon victories, including six in 2017 alone (with two of them coming on consecutive days).

His fastest race, however, came in Austria with 1:01:05 for third place last year in Krems. That time also makes him the fastest on paper among the field in Gdynia.

Zelalem Mengistu, like Maiyo, has been a regular feature on the Polish road-running circuit and is also a repeat visitor to Gdynia, having finished in runner-up position last year. That, along with a best of 1:02:37, makes the Ethiopian another one of the strong contenders for top positions.

Poland's Marcin Chabowski will be hoping to keep pace with the leading contenders. The 2005 European U20 steeplechase champion has in recent years been Poland's top half marathon specialist. While his best of 1:02:26 dates back to 2011, he has been successful over the distance more recently with a fourth-place finish at the 2016 European Championships and wins in Poznan and Warsaw last year.

Other possible contenders in the race include Kenya’s Abel Rop, whose best of 1:02:43 was set in Tirana last year, and Spain’s El Hassan Oubaddi, who ran 1:02:51 to finish second in Seville this January.

Kenya’s Christine Oigo, like her compatriot Maiyo, has a history in Gdynia, with second places in both 2016 and 2017, and will be hoping to go one better on this occasion. The hopes are well founded; since last year's race, she has won four half marathons and improved her personal best twice, to 1:11:50 in Warsaw, where she finished third, and then 1:11:32 in taking victory in Podgorica.

The strongest challenge to her is likely to come from two other runners. Her compatriot Ruth Matebo set a PB of 1:13:26 for second place in Zagreb last year, but that may be due for revision after she set a big personal best of 2:32:15 at this year's Marrakech Marathon.

Viktoriya Khapilina, fourth in last year's race, will also be back to try to improve on her position, although the Ukrainian's fastest time of 1:14:22 in Bila Tserkva last year puts her some way behind the three other main contenders in the race.