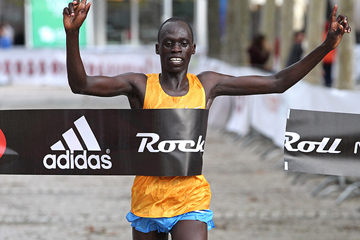 Kipsang and Mekash the favourites in Florence

Kenya’s Asbel Kipsang and Tefera Dinknesh Mekash from Ethiopia will start as favourites at the Asics Firenze Marathon, a World Athletics Bronze Label race, on Sunday (24).

Kenyan Peter Kirui Cheruiyot boasts solid personal best times in the half marathon with 59:22 from Prague in 2014 and in the marathon with 2:06:31 from Frankfurt in 2011.

Gilbert Kipleting Chumba from Kenya has already run on Italian soil and won the past two editions of the Treviso Marathon - in 2018 he clocked his personal best of 2:12:19.

The Ethiopian contingent will be represented by Gereme Azmeraw Mengistu and Nigussie Sahlesilassie Bekele. Mengistu set his personal best of 2:12:27 in November 2016. Bekele won the Stockolm marathon last June in 2:10:10, also a personal best.

Morocco’s Hicham Amghar, who has a 1:00:23 half marathon PB, will make his marathon debut.

The best Italian runner in the field is Ahmed Nasef, who won two national marathon titles and set his marathon career best of 2:10:59 in 2012.

Croatian ultra-marathon specialist Nikolina Sustic set her previous marathon career best of 2:41:11 in Florence last year and improved this time to 2:37:55 in Padua in 2019. Former European U23 cross country champion Jess Piasecki will make her debut over the marathon distance after improving her personal best in the half marathon to 1:11:42 in Usti nad Labem in Czech Republic last September.