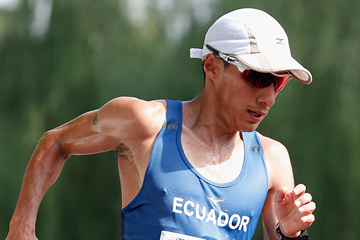 Chocho, Tallent and Dunfee to clash over 50km in Monterrey

Following a solid display last weekend over 20km in Ciudad Juarez, Ecuador’s Andres Chocho is ready to take on some of the best 50km specialists, including Australia’s Jared Tallent and Canada’s Evan Dunfee as the IAAF Race Walking Challenge resumes on Sunday (19) for a second consecutive weekend in Mexico.

Chocho, third at 20km in Ciudad Juarez, has enjoyed success every time he has competed in Mexico. The 33-year old set a South American record of 3:42:57 for 50km to take gold in Ciudad Juarez in 2016.

The Pan American Games champion will have a tougher challenge this weekend with four-time Olympic medallist Tallent and Canada’s Dunfee. For both, it will be their first 50km after finishing second and fourth, respectively, at the 2016 Olympic Games in Rio.

Tallent, who in Rio claimed his third consecutive Olympic medal at 50km, including gold in London 2012, took it easy last weekend in Ciudad Juarez with a 1:32:01 stroll for 39th place over 20km. Dunfee finished a close sixth in the same race.

The hosts country’s charge is led by Omar Zepeda, who has stepped on the podium nine times at 50km in the Mexican event of the challenge; Jose Leyver Ojeda, a three-time winner on home soil; and Jorge Martinez, third in 2016.

Eder Sanchez, the 2009 world 20km bronze medallist, is entered to contest the fourth competitive 50km in his career and his first since 2015.

Two new winners to be crowned in the 20km

With Mexico’s Maria Guadalupe Gonzalez and Colombia’s Eider Arevalo, winners in the 20km in Ciudad Juarez, sitting out, the second Mexican leg of the challenge will have new winners in Monterrey.

Omar Pineda, who led for most of the race before being overtaken by Arevalo in the last kilometre last Sunday, hopes to redeem himself and bring home the victory.

Three other Mexicans in the top 10 in Ciudad Juarez also made the trip to Monterrey to contest the 20km: Jose Luis Doctor, Ricardo Ortiz and Ever Jair Palma. Palma’s brother, Isaac Antonio, returns to action after missing the race last weekend. He holds two podium finishes at home, including the win in 2013.

Thorne returns to Mexico after failing to finish his race in 2014. Gomez learned to race walk in his native Mexico before his family moved to Canada when he was a child. He claimed silver in Chihuahua in 2015. Martin, who finished third at the IAAF World Race Walking Team Championships Rome 2016, will be competing in Mexico for the first time.

With the absence of Gonzalez and Brazil’s Erica de Sena, the runner-up last Sunday, the women’s race should be more open, but three women with a rich racing history in Mexico would like to return to the top of the podium in Monterrey.

The Portuguese duo of Ines Henriques and Ana Cabecinha, third and fourth last year, will start as the pre-race favourites.

Henriques, 36, has been a regular feature in the Mexican event of the challenge. Winner three times between 2011 and 2013, she has also stepped on the podium on three other occasions in Mexico since her debut in this event in 2008, including a bronze at the 2010 IAAF World Race Walking Cup.

Cabecinha, who has finished in the top eight at six global championships, has been on the podium every time she has raced in Mexico. After missing the 2016 edition, she returned with a third-place finish last Sunday.

Colombia’s Sandra Lorena Arenas, winner in Chihuahua in 2014, should also be in the mix, as well as Australia’s Regan Lamble, the first challenge leader after her win at the Oceania Championships last month.

After joining her namesake Maria Guadalupe Gonzalez in the first eight kilometres of the Ciudad Juarez race, Maria Guadalupe Sanchez hopes to have a smarter race on Sunday to keep Mexico on the podium. Monica Equihua has similar goals after finishing third twice in 2012 and 2013.

Monterrey welcomes some of the world’s best race walkers 24 years after hosting the World Cup. The city and the state of Nuevo Leon has produced leading athletes in this discipline, including two-time 1984 Olympic medallist Raul Gonzalez, who currently heads the state sports department.

The busy Sunday programme will start at 7am local time with the 50km, followed by the junior 10km races. Elite men will contest the 20km at noon, followed by the women two hours later. The top eight in the longest distances will receive prize money, including US$5000 for the winner.

The 10-event IAAF Race Walking Challenge will then travel to Asia, South America and Europe over the next five months before its conclusion at the IAAF World Championships London 2017.