The longer of the two Olympic race walking distances – and the longest athletics event on the Olympic programme – 50km races are traditionally held on a looped road course.

Race walking is highly technical and very different to running because one foot must be in contact with the ground at all times. Failure to do so is known as ‘lifting’. 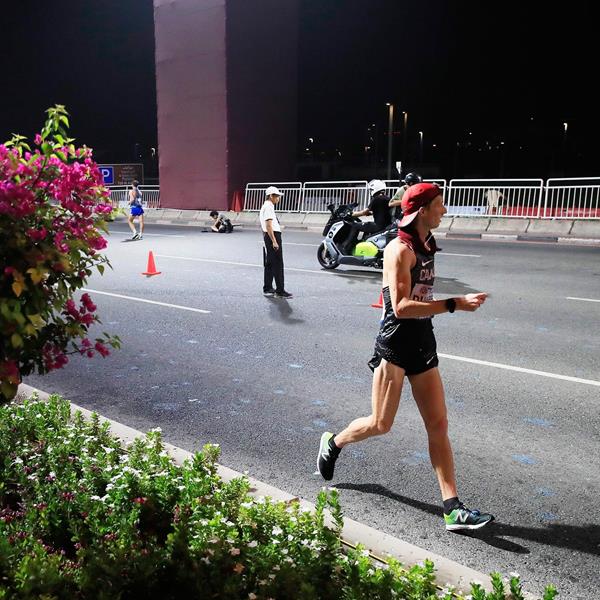 The rules also state that the advancing leg must straighten from the point of contact with the ground and remain straight until the body passes over it. Judges inspect the race and carry paddles with symbols for loss of contact and bent knee. If a race walker is shown three warnings (paddles) from different judges, including the chief judge, it leads to disqualification. In some race walking events a pit-lane is used for athletes to serve a five-minute time penalty after receiving three warnings. A red paddle is shown to a disqualified athlete.

The race order is determined by time.

Race walking dates from the 17th and 18th centuries. The first competitors were the footmen who would run and/or walk by the side of their masters’ coaches. The aristocracy of the day began to stake wagers as to which of their footmen would win a race – some of which lasted for six days! – and the sport became an increasingly popular professional activity during the 19th century, when it was known as 'pedestrianism'.

Race walking first appeared at the Olympics in 1904 with a half-mile race that was part of the 10-event ‘all-around championship’, an early forerunner of the decathlon. Individual races, initially over shorter distances than are common today, were introduced at the Intercalated Games of 1906 and, apart from the 1928 Amsterdam Games, have been a fixture at Olympic Games and World Championships ever since.

The men’s 50km race walk became part of the Olympic schedule in 1932, although it was not contested at the 1976 Olympic Games in Montreal. Women first competed over the 50km race walking distance at the 2017 World Athletics Championships in London. The 50km race walk for women did not feature as part of the 2020 Tokyo Olympic programme.

The finest 50km race walking exponent in history is Robert Korzeniowski of Poland, who claimed a stunning hat-trick of Olympic titles from 1996-2004. Ines Henriques of Portugal won the inaugural women’s 50km race walk at the 2017 World Championships in a world record time.