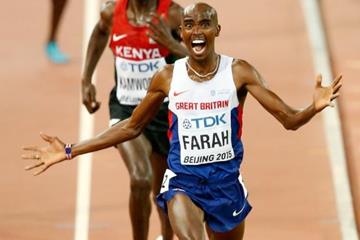 It would be easy to consider this as a race for silver, given Mo Farah's dominance in global championships over the past six years. Since missing out on gold by a hair's breadth in Daegu in 2011, after Ibrahim Jeilan unleashed one of the greatest ever final laps, the Briton has won world doubles in 2013 and 2015 and Olympic doubles in 2012 and 2016.

If Farah triumphs in the 10,000m in London, he will have strung together an unprecedented 10 consecutive global track distance titles (11 if he wins the 5000m as well). No runner has ever achieved that – not Kenenisa Bekele (four, with Olympic and World Championship doubles in 2008-09), not Haile Gebrselassie (six at 10,000m, but no double wins), not Lasse Viren (four at Olympic level in pre-World Championships days), not Emil Zatopek, not Paavo Nurmi.

So can anyone break Farah's golden streak? One thing is certain: Farah's opponents will need to change their tactics from recent years and not leave it until the final lap.

But then, such is Farah's dominance, he has the ability to win the race however it is run; he has also shown he can cope with mid-race surges and even clawed his way back from a fall to take gold in the Olympic final last year.

Given that they lead the world on times – 27:08.26 and 27:09.08 from Hengelo – Ethiopian duo Abadi Hadis and Jemal Yimer might be tempted to take it out fast from the start to make it a true race. Hadis is much improved from his 15th in Rio last year, having placed third at the IAAF World Cross Country Championships this year ahead of Yimer. The pair will be joined by 18-year-old teammate Anduamlak Belihu (27:20.57) to form a strong trio.

World cross-country champion and world 10,000m silver medallist Geoffrey Kamworor won the Kenyan Trials from Bedan Karoki and Olympic silver medallist Paul Tanui – undoubtedly there will be talk of team tactics against Farah again. But any tactic would need to be fast and sustained to have any chance of breaking the Briton.

So the million dollar question remains: can anyone find a strategy to beat Farah or will they play into his hands yet again?