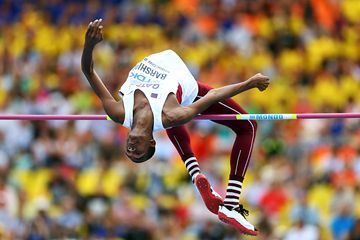 If he succeeds, it'll be the culmination of a long quest for a global outdoor title for the 26-year-old Qatari who since topping 2.43m in 2014 has occupied the No.2 spot on the world all-time list. Seventh in 2011, second in 2013 and fourth two years ago, the two-time Olympic medallist – bronze in 2012 and silver in 2016 – will arrive at the London Stadium as the overwhelming favourite.

Barshim is undefeated in six competitions this year, and lays claim to the world's five highest clearances of 2017, topped by a 2.38m leap in Oslo which delivered one of his four IAAF Diamond League triumphs from the current campaign. He also seems to have captured a remarkable consistency that was absent before, with all but one of his winning efforts in the 2.35m to 2.38m range. The other, at 2.33m, wasn't too far off.

The season's No.2, German champion Mateusz Przybylko, is a name new to most observers. Entering the season with a 2.30m best from 2015, the 25-year-old improved to 2.35m in Bottrop on 25 June to throw himself into the London medal picture. His big meet record, however, is on the thin side. He was 28th in qualifying at both the 2015 World Championships and in Rio last year, topping just 2.22m, experiences he'll want to put behind him.

Neutral athlete Danil Lysenko, 20, topped 2.34m in Saransk on 22 June, and has been consistent at 2.32m, suggesting he'll arrive as a medal contender.

Majd Eddin Ghazal of Syria, Ukraine's Bogdan Bondarenko and Pole Sylwester Bednarek have all topped 2.32m outdoors this summer while Briton Robbie Grabarz and China's Zhang Guowei have cleared 2.31m. Bondarenko took the world title in 2013 and world silver two years ago, Bednarek claimed the European indoor title in March, and Grabarz Olympic bronze in London in 2012. All should be in the medal hunt.

Others with medal ambitions include Erik Kynard of the US, the 2012 Olympic silver medallist, with a 2.30m season's best; 2007 world champion Donald Thomas of The Bahamas, a World Championships finalist at the past three editions; and neutral athlete Ilya Ivanyuk, the 2015 European U23 champion who's topped 2.30m this season.

Canada's world and Olympic champion Derek Drouin is on the slate to defend his title, but some early season injuries coupled with combined events training have seen him lag on the world scene. His best jump of the year, 2.33m, was indoors back in February. In his most recent outing, he topped just 2.25m for third in Oslo on 15 June.