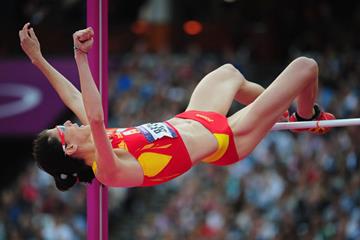 The 30-something generation would appear well poised to mount a strong challenge for the Olympic gold in an event which serves up a number of compelling story lines.

The form horse of 2016 is the indefatigable Ruth Beitia, who at the age of 37 is seeking to be the oldest ever winner of a jumps medal – of either gender – at an Olympic Games.

The Spanish veteran has been in supreme form this season, banking the European title for a third time as well as securing IAAF Diamond League wins in Oslo, Stockholm and London.

During a distinguished 21-year international career, Beitia has pocketed a slew of medals on the world and European stage, but has yet to win an Olympic medal – she finished fourth at the 2012 London Olympics Games and briefly retired in the wake of that disappointment – and she is desperate to finally mount the podium in Rio.

Among her chief rivals is the 32-year-old mother-of-three Chaunte Lowe, who propelled herself to the top of the world lists with an impressive 2.01m clearance to take the US title in July.

Lowe, the 2012 world indoor champion, has competed sparingly this season but on current form is more than capable of improving upon her two sixth-place finishes at the past two Olympics in Beijing and London.

Another 30-something looking to create a slice of history is Blanka Vlasic, who plans to defy a longstanding achilles tendon injury to strike gold.

The one title missing from the flamboyant Croatian’s CV is an Olympic crown and should she achieve her ambitions it would be nothing short of a minor miracle as her achilles issues have restricted her to just one competition in 2016 – and that was back in January.

The 32-year-old 2008 Olympic silver medallist should never be discounted, though, as she bagged a World Championships silver medal in Beijing last year having made just two outdoor appearances prior to the competition in the Bird’s Nest Stadium.

Cunningham mature beyond her years

At the other end of the athletics age spectrum, half the age of Beitia, is the 18-year-old world indoor champion Vashti Cunningham.

The beanpole US jumper, the daughter of NFL great Randall Cunningham but looking to make a name for herself in her own right, set a world U20 indoor record of 1.99m this winter and has cleared 1.97m outdoors.

Other names who could feature at the sharp end of the competition include Poland’s 2014 world indoor champion Kamila Licwinko, who has cleared 1.99m outdoors this year. She is a consistent performer and claimed bronze at the World Indoor Championships Portland 2016 earlier this year.

Germany’s Marie-Laurence Jungfleisch advanced to number two on the 2016 world list with a stunning PB of 2.00m last month to mark her down as a potential medal candidate, especially after she finished sixth at last year’s World Championships.

Lithuania’s European joint silver medallist Airine Palsyte, who was fourth in Portland, is another potential challenger while another interesting entrant is the gifted combined-eventer Akela Jones of Barbados, who boasts an outstanding 1.98m clearance from the indoor season.

The other European silver medallist, Mirela Demireva of Bulgaria, is another to be respected along with Italy’s Desiree Rossit and Ukraine’s Oksana Okuneva, and all three have cleared 1.97m this season.

There will also a lot of interest in the current world U20 and U18 champion Michaela Hruba, although the Czech jumper’s chance of a medal is more likely to come in Tokyo in four years’ time.