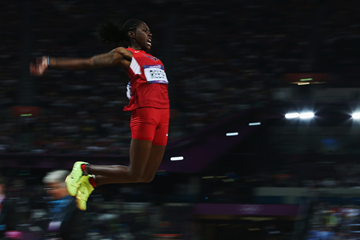 Brittney Reese already owns more global long jump titles than any other woman in history. Now she wants another.

The one significant blemish on her career record came at the IAAF World Championships Beijing 2015, where she failed to reach the final having shown indifferent form throughout the season following surgery in the winter of 2014.

She nearly came close to retiring, but thankfully had second thoughts.

Earlier this year, she emphatically returned to seven-metre territory to win the world indoor title with 7.22m. Last month she won at the US Olympic Trials with a lifetime best of 7.31m, the longest jump in the world for 12 years.

If Reese wins in Rio, she would become the first woman to successfully defend an Olympic long jump title.

Ivana Spanovic is also no stranger to major championship podiums, taking silver at this year’s IAAF World Indoor Championships Portland 2016 and bronze medals at the past two World Championships, as well as winning the European title last month.

The Serbian looks destined for another medal after an incredibly consistent season so far; across her six competitions this year, Spanovic’s shortest jump is 6.88m, while her best is 6.95m.

Her best performance this year is her marginally wind-assisted 7.02m to finish second to Reese at the US Olympic Trials, while most of her other jumps in 2016 have ranged between 6.60m and 6.80m.

She also ran a lifetime best of 10.78 to finish second in the 100m at the US Olympic Trials, so if she can translate that speed into a jump, she could be tough to beat.

Germany’s Sosthene Moguenara jumped a lifetime best of 7.16m earlier this year, but one day later she tore some ligaments in her ankle and hasn’t competed since then. It would be a surprise if she is able to return to seven-metre form by the time of the athletics programme in Rio.

Australia’s Brooke Stratton broke the Oceanian record with 7.05m back in March. She backed it up with a fifth-place finish at the World Indoor Championships and has since been fairly consistent on the international circuit but hasn’t jumped beyond 6.70m since the end of the indoor season.

With her last-round leap of 6.93m at the US Trials, Olympic bronze medallist Janay De Loach went from seventh to third, securing her spot on the US team for Rio. She has reached the final at every global championships she has contested, and looks to be in shape to do so again in Rio.

For three rounds at last year’s World Championships, Shara Proctor led the long jump final after sailing out to a British record of 7.07m. Although she hasn’t yet matched that form this year, she has improved her season’s best in her two most recent competitions and so appears to be timing her peak to perfection again.

Fellow Briton Jazmin Sawyers also has a great record of producing her best when it matters. The 22-year-old sailed out to a wind-assisted 6.86m to take the silver medal behind Spanovic at the recent European Championships.