Ethiopia’s Fatuma Sado overcame heavy rain and a stomach problem in the latter sages to win a second title at the Xiamen International Marathon, an IAAF Gold Label road race, on Sunday (7).

As the winner of 2013, Sado and defending champion Meseret Mengistu were both considered the leading favourites in the women’s race in the Chinese coastal city.

However, the 27-year-old reigning champion, who was also the fastest entrant with a personal best of 2:23:25 from her victory at the 2015 Paris Marathon, dropped out of the leading group soon after the start.

Running in rainy conditions, four Ethiopians including Sado, Muluhabt Tsega, Hirut Alemayehu and Tigist Memuye paced the race to 15 kilometres in 51:11. After a few kilometres both Tsega, who set the course record of 2:28:08 at the 2017 Hangzhou Marathon, and Memuye, the winner of last year’s Zheng-Kai Marathon, were unable to keep up with the pacers.

Sado and the 24-year-old Alemayehu ran shoulder-to-shoulder for just another one kilometre before Sado pulled away as she approached the halfway mark to seize the sole lead.

The experienced Sado, with marathon titles in Hamburg, Los Angeles, Beijing and Warsaw to her name, hit 25 kilometres in 1:25:14, 30 in 1:42:42 and when she passed the water tables at 35 kilometres she had already built a comfortable lead of more than two minutes.

However, Sado’s pace decreased gradually in the last five kilometres with a pained expression on her face. With just several hundred metres to go before the finish, she stopped to vomit.

Alemayehu trimmed more than six minutes off her PB to finish second in 2:30:09. It was only her second race over the classic distance. Last year she clocked 2:36:55 to finish sixth in Hefei, China.

Defending champion Mengistu rallied to take third in 2:30:15, more than four minutes shy of her winning mark of 2:25:58 last year.

The men’s race also saw a sweep of the podium by Ethiopians.

Dejene Debela, who owns a PB of 2:07:10 from his fourth place finish in Eindhoven last year, emerged victorious from a three-man battle in the last kilometre to notch his first marathon title in 2:11:22.

When the leaders hit the 35th kilometre, only five men were left, including pre-race favourites Ayele Abshero of Ethiopia, who set a PB of 2:04:23 when winning the 2012 Dubai Marathon, and his compatriot Deribe Robi, whose PB is 2:05:58.

Ukraine’s Ihor Olefirenko, who was 18th at the IAAF World Championships London 2017, slowed after 38 kilometres. And the 27-year-old Robi also quit the title contest before reaching kilometre marker 40.

Debela, Abshero and Tariku Bekele, the 10,000m bronze medallist at the 2012 London Olympic Games with a marathon PB of 2:09:33 set last year, remained together until the final 1000 metres. Then Debela launched his powerful charge for the win.

Ten metres before the line, Debela looked back to check his advantage and opened his arms to begin his celebration.

It was only the fourth race for Debela since his debut in marathon in 2016. And the victory can well serve as a birthday gift for him as he will turn 23 in two days.

The 30-year-old Bekele finished second in 2:11:29 while the 27-year-old Abshero, the fastest man on paper, failed to live up to expectations and was forced to settle for third in 2:11:33.

BACK
Pages related to this articleAthletes
Fatuma Sado 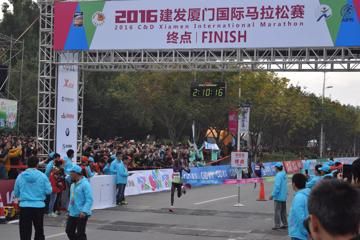 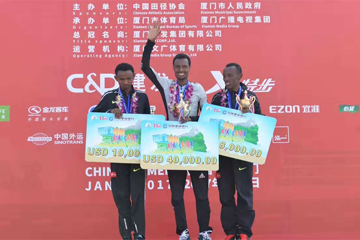