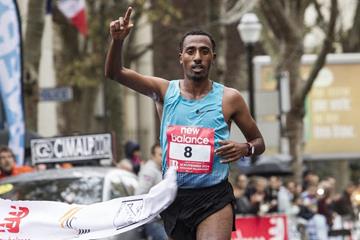 The 20th edition of the Semi-Marathon Boulogne-Billancourt Christian Granger will see Ethiopia’s Yitayal Atnafu defend his title at the IAAF Bronze Label Road Race on Sunday (20).

Last year’s edition was cancelled following the horrendous series of terrorist attacks which struck Paris on 13 November 2015. Atnafu will be defending the title he won in 2014 when he ran a PB of 1:01:03.

But retaining his title won’t be an easy task in the presence of so many high quality runners, namely Edwin Kipyego, who has the fastest PB of the field with a time of 59:30 set 14 months ago.

The 26-year-old Kenyan seems to be the favourite as he is the only one with a sub-60-minute PB. It also suggests that the 1:00:11 course record set by Kenya’s Franklin Chepkowny in 2013 could be in jeopardy, unless the conditions turn out to be difficult as the forecast calls for rain and a strong wind.

Kipyego, who won the Marseille-Cassis 20km in 2012 and 2015, proved his consistency this year, clocking three sub-61-minute half marathons, including his success in Den Haag in a season’s best of 1:00:27 – a performance which was a world-leading mark at the time.

In addition to Atnafu, Kipyego’s main rival includes Fentahun Hunegnaw, who almost broke the one-hour barrier when finishing sixth at the 2015 Berlin Half Marathon in a personal best of 1:00:10. His best this year is 1:01:21, set in Yangzhou in April.

Morris Munene could also come up trumps on Sunday. The 21-year-old Kenyan was victorious at the Santa Pola and Madrid half marathons earlier this year and recently set a PB of 1:00:35 in Krems.

French hopes will rest on Hassan Chahdi’s shoulders. The 2010 European cross-country silver medallist, who has opted to contest the Boulogne-Billancourt Half Marathon instead of the French qualifying race for the 2016 European Cross Country Championships, will be aiming to improve his lifetime best of 1:01:38 set in Paris in 2015.

The women’s field isn’t as deep as the men’s, but the competition will nevertheless be interesting and will likely come down to a duel between Ethiopian duo Damaris Areba and Zwedenesh Ayele.

Both runners have similar credentials. Areba, 21, set her PB of 1:11:32 last year in Cardiff, while Ayele’s PB is just five seconds slower, having clocked 1:11:37 two years ago when finishing second in Boulogne-Billancourt.

About 8000 runners will take part in Sunday’s race, making this half marathon one of the most popular in France.