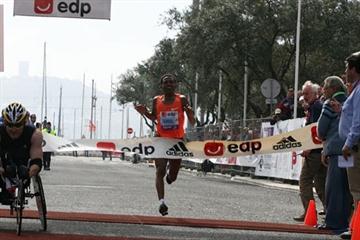 World record holder Zersenay Tadese will be gunning for a fourth victory at the EDP Lisbon Half Marathon, an IAAF Gold Label road race, on Sunday (11).

Once again, the Eritrean, who set the 58:23 world record on this course in 2010, is the principal name on the long elite entry list. But he can expect strong opposition from eight athletes who have covered the distance in under one hour, along with 2012 Olympic and 2013 world marathon champion Stephen Kiprotich of Uganda, who has never run under 61 minutes --his PB is 1:01:15-- but is this weekend aiming to join the sub-60 fraternity.

On the list of favourites, we can include Kenyan Sammy Kitwara who as the winner in 2016 is quite familiar with the course and with a 58:48 lifetime best, capable of fast times. His compatriot Stanley Biwott, the winner of the 2015 New York Marathon, is also part of sub-59 club with a 58:56 lifetime best.

Then comes the 59-minute squad, first from Kenyan: James Wangari with 59:07, second here last year; Edwin Kiprop Kiptoo at 59:26; and Edwin Kibet Koech at 59:54, who was third here last year. Others include Eritrean Samuel Tsegay, the 2014 World Half Marathon Championships runner-up, with a 59:20 best; New Zealand’s Zane Robertson, with 59:47, brother of last year’s winner Jake Robertson; and Moroccan Aziz Lahbabi, with 59:25.

There are also several notable debutants moving up to the distance on Sunday, including Erick Kiptanui, winner of Madrid’s San Silvestre 10km; Noah Kipkemboi, third in the Nijmegen 15km last November with 42:43; and Nicholas Kosimbei, the 10,000m bronze medallist at the 2014 World U20 Championships.

The Portuguese field isn’t strong this year, with most local runners focusing on the national cross country championships on 18 March.

The women's competition also has a lot of quality, leaving a wide open contest. Three women have sub-1:08 personal bests, making them the main candidates for the win: Kenya's Pasalia Chepkorir Kipkoech, third here in 2013, who has a 1:07:17 personal best, her compatriot Magdalyne Masai, who was fifth last year and boasts a 1:07:31 lifetime best, and Ethiopian Belainesh Oljira who has clocked 1:07:27.

But there will also be an Ethiopian on the starting line, making their debut over the distance, who’ll probably have a word to say for the top finishes: Hiwot Ayalew, runner-up at the 2013 World Cross Country Championships.

Then there is an interesting group of athletes who come determined to run under 1:10, including Bahrain’s Mimi Belete, who sports a 1:09:15 best, Ethiopian Helen Bekele Tola, with a 1:09:48 best, and her compatriot Sofiya Shemshu, who has clocked 1:08:51 at 20 km.

As in the men’s race, most Portuguese are targeting next weekend’s national cross country championships, but Mónica Silva and Doroteia Peixoto, with bests of 1:13:41 and 1:14:51, respectively, will be competing.