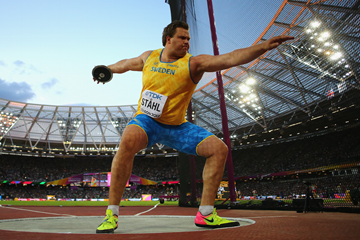 Only once in IAAF World Championship history has the men’s discus required a 70-metre throw to strike gold, but on the evidence of what we have seen so far during a stellar year for the event, a throw beyond this distance could be a necessity to climb the top step of the podium.

Leading the way has been Daniel Stahl, the stocky Swede who has hurled the discus beyond 70 metres three times this year, led by a mighty world-leading 71.86m – the longest throw in the world for 11 years and a distance which elevated the 27-year-old to equal fourth on the world all-time list.

Stahl has been the world’s dominant discus thrower in 2019, winning 12 out 15 competitions including four out of five meets on the IAAF Diamond League circuit.

Leading the opposition will be Fedrick Dacres, who set a Jamaican record of 70.78m to inflict a rare defeat on Stahl at the IAAF Diamond League meeting in Rabat in June.

Dacres, who sits second on the 2019 world list, snared the Pan American title in July and has finished top two in 22 of his 23 discus competitions this year.

Among the other contenders, world and European champion Andrius Gudzius should not be discounted. The powerful Lithuanian boasts a season’s best of 67.73m and while not quite at his best so far in 2019, given his rich championship pedigree it would be no great surprise to see the 28-year-old feature.

European bronze medallist Lukas Weisshaidinger is another with medal prospects. The Austrian thrower has enjoyed a consistent campaign, boasting four Diamond League podium finishes and a season’s best of 68.14m in Rabat.

Norwegian Ola Stunes Isene has made a huge improvement in 2019 and if he can reproduce his lifetime best of 67.78m in Albufeira in Portugal in April then he too can feature in the medal picture.

Competing at his seventh World Championships, three-time medallist Piotr Malachowski is always a danger as the 36-year-old Pole demonstrated when winning at the European Team Championships in Bydgoszcz in August.

Another evergreen performer looking to make his mark is 2011 world bronze medallist Ehsan Hadadi. Aged 34, the Asian champion has a season’s best of 67.19m and if the Iranian finds his groove he could also be a factor.

World bronze medallist Mason Finley of the USA is also slated to compete. However, since producing an early season throw of 67.13m, he has struggled to reproduce his best form. US champion Sam Mattis (66.69m) is also entered.

Also set to take to the discus circle inside the Khalifa International Stadium are Sweden’s fourth-place finisher at the 2018 European Championships, Simon Pettersson, and the 2015 world silver and bronze medallists: Philip Milanov of Belgium and Poland’s Robert Urbanek.