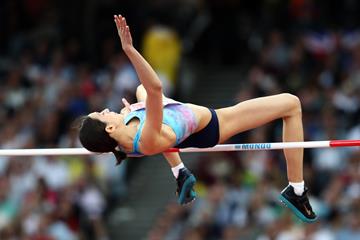 Mariya Lasitskene's bid to become the first three-time high jump champion seems to be on course but she may not be arriving in Doha with the same air of invincibility she has become accustomed to ahead of major championships in recent years.

The 26-year-old authorised neutral athlete has pieced together yet another notable season, winning 11 of her 12 outdoor competitions, capturing another IAAF Diamond League title and producing the year's highest leap, a 2.06m effort in June in Ostrava. She topped 2.00m or better in seven of those competitions, a height only four others have managed this year.

But she appeared to struggle in her last two competitions, topping 1.98m at the Europe-USA match on 10 September where she finished third, and at the Skolimowska Memorial in Chorzow, Poland, on 14 September, winning at 1.94m but missing three times at 1.96m. Just a sub-par four days for Lasitskene? Considering her major championships mettle, most probably.

If anyone is ready to unseat her, the most likely candidate appears to be Yuliya Levchenko. The 21-year-old Ukrainian rose to the occasion in London two years ago, topping a personal best of 2.01m to take surprise silver while still a teenager. At the Europe-USA match, she finally bettered that mark, topping 2.02m to get the better of Lasitskene for just the second time in 29 head-to-heads. In Minsk, she bowed out at 2.04m, but with one especially close attempt, showed that that height was well within her capabilities this season.

Teammate Yaroslava Mahuchikh is another precocious talent. Having won world U18, European U18 and Youth Olympic titles in 2017-2018, she added another medal to her collection earlier this year with gold at the European U20 Championships. She also cleared a world age-17 best of 2.00m, just one centimetre shy of the world U20 record, but this will be her first appearance at a senior championships.

Karyna Demidik of Belarus, the world U20 champion, is also progressing well, and could be a podium threat. The 20-year-old joined the two-metre club with a first-attempt clearance at the height in Lausanne, marks backed up with 1.98m and 1.96m clearances earlier in the season. But in her last two outings, she hasn't topped 1.90m.

Vashti Cunningham, the 2016 world indoor champion, also joined the ranks of the two-metre club this season, sailing clear at the height on her first attempt to win at the Prefontaine Classic on 30 June. But the 21-year-old has only competed once since, jumping to the US title on 27 July, so her form remains veiled in mystery.

Mirela Demireva of Bulgaria, the Olympic silver medallist and two-time European silver medallist, who has scaled 1.97m this year, should also play a role in the podium battle. Poland's Kamila Licwinko, the bronze medallist two years ago, topped 1.95m in her most recent outing, and should figure in the medal chase.

Alessia Trost of Italy, who jumped to world indoor bronze last year, could also be a factor, along with Australia's Nicola McDermott, Romanian Daniela Stanciu and Swede Erika Kinsey, who have all topped 1.96m in 2019.