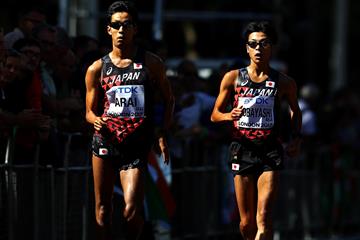 Japan has never won a gold medal in the history of this event or a medal of any colour in the 50km race. But spearheaded by world silver and Olympic bronze medallist Hirooki Arai, the Japanese team looks to have assembled their strongest possible squad with three out of their five entrants boasting a sub-3:45 lifetime best.

The 29-year-old Arai, who will turn 30 in three weeks, registered his personal best of 3:40:34 back in 2014, the third fastest time ever achieved by a Japanese athlete. He went on to establish himself as one of the best 50km race walkers in the world when he clocked 3:43:44 to finish fourth at the World Championhips in Beijing in 2015.

He cruised to a podium finish for the first time in a major international competition by earning the bronze medal in 3:41:24 at the Rio Olympic Games one year later, and proved his consistency in 2017 as he took the silver at the World Championships in London with a clocking of 3:41:17.

Arai has yet to compete in any 50km event this year, but a 20km personal best of 1:19:19 set in Kobe three months ago shows he is in good form.

Teammate Kai Kobayashi, who trailed two seconds behind Arai to take the bronze medal in London with a career best time last year, is another candidate for the individual gold in Taicang. The 25-year-old, a former 20km specialist, debuted over 50km in 2016 when he won the national title in Takahata in 3:42:08.

The Japanese quintet also includes Sitoshi Maruo, the fifth-place finisher at last year’s World Championships with a PB of 3:43:03, as well as Yuki Ito and Hayato Katsuki.

Canada’s Evan Dunfee could be the biggest threat to the Japanese. The 27-year-old set a national record of 3:41:38 to finish fourth at the 2016 Olympic Games in Rio after being overtaken by Arai in the closing stages.

Having taken team silver at 20km in Rome two years ago – Canada’s first ever medal in a men’s event at these championships – the Pan-American 20km champion is now looking to make his mark at the longer event.

Rafal Augustyn of Poland achieved his career best of 3:43:22 when taking a record third win in the Slovak city of Dudince in 2016, suggesting the 33-year-old should be considered as another serious contender in the individual rank.

Backed up by two teammates with sub-3:48 PBs at the distance, Augustyn will also be leading Poland’s charge for a medal in the team competition.

Perseus Karlstrom shattered a 29-year-old Swedish record to win in Melbourne last year in 3:44:35. In Taicang he will be shouldering the country’s hope of the first medal in the event since 1963.

The field also includes Spain’s evergreen veteran Jesus Angel Garcia, who will be making a record 13th appearance at the championships.

The 48-year-old owns the fastest PB in the field with his 3:39:54 clocking set when winning the 1997 edition of this event, then known as the IAAF World Race Walking Cup. He has collected three medals and eight top-six finishes from his previous appearances since 1993, the same year when he claimed the world title in Stuttgart.

With some of his rivals just half of his age, Garcia still maintains his competitiveness with an impressive mark of 3:58:37 just achieved in February. He will be joined on the Spanish team by Jose Ignacio Diaz, Pablo Oliva, Benjamin Sanchez and Marc Tur, who is the world leader of the year, in their pursuit of the team honours.

Hosts China have fielded five young race walkers in the event with the quickest being 23-year-old Wang Qin whose PB is 3:50:16. In spite of the lack the experience in international arenas, the home support alongside the course could be of great help in the 25-lap race, especially after three hours of race walking in humid conditions as the forecast calls for cloudy weather with occasional drizzles on Saturday.