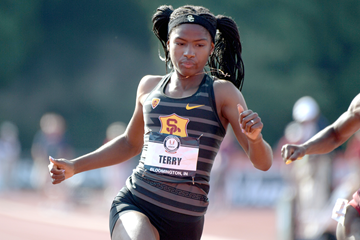 USA’s Twanisha Terry will take on Jamaica’s Briana Williams over 100m in what is possibly one of the most eagerly awaited clashes of the championships.

Terry became just the fifth U20 athlete in history to run 100m within 11 seconds, clocking a PB of 10.99 earlier this year. She has two other wind-assisted sub-11-second clockings to her name this season and finished third at the NCAA Championships and first at the US Junior Championships.

The 19-year-old will head to Tampere off the back of a long and busy collegiate season, but she’ll take confidence from the fact that she set a PB in her final race of 2017 at the end of what was a similarly hectic high school campaign.

The prodigious Williams, three years Terry’s junior, will be one of the youngest women in the 100m in Tampere but also one of the fastest.

She clocked a world age-15 best of 11.13 earlier this year, just days before turning 16. More recently she has tested herself against esteemed opposition, placing fifth in the 100m at the senior Jamaican Championships and finishing within 0.2 of double Olympic champion Elaine Thompson and multiple world and Olympic champion Shelly-Ann Fraser-Pryce.

Terry will be aiming to keep the world U20 100m title in US hands after Candace Hill’s victory in 2016, while Williams hopes to become the first Jamaican winner of the title since Veronica Campbell-Brown in 2000.

Daija Lampkin set a PB of 11.34 to finish second at the US Junior Championships, but the -1.1m/s headwind in that race suggests she is capable of a faster time in better conditions.

Germany’s European U20 silver medallist Keshia Kwadwo is the fastest European U20 athlete this year and has been closing in on the 11.33 PB she set in 2017.