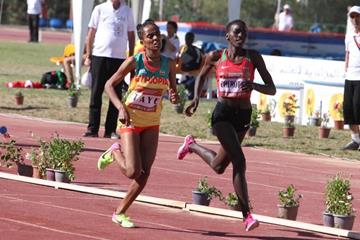 Clarence Munyai won the 200m title in 20.22 to produce the highlight performance of the final day of action (2) at the 13th African Junior Championships in Tlemcen, Algeria.

Munyai, who broke the African record in the event with a 20.10 performance in Pretoria in March and arrived in this northwestern Algerian city on the heels of a 31.61 300m world U20 best in Ostrava, won by nearly a full second over Kundai Maguranyanga of Zimbabwe who clocked 21.11.

The 19-year-old sprinter's victory capped a strong final day for South Africa, who claimed 12 victories overall from a 17-medal haul.

That was still well short of Ethiopia's performance, who were the most dominant force at these championships, winning 13 titles and 38 medals in all.

In the men's contest Selemon Barega Shirtaga and Tesfahun Aklnew Guangul finished 1-2 ahead of Kenyan Nicholas Kipkorir, the 10,000m winner. Shirtaga clocked 13:51.43 and Guangul 13:52.91, more than a second clear of the Kenyan.

The final day began with Ayalnesh Dejene Nigatu leading an Ethiopian 1-2 in the 10,000m race walk in 52:14.73, ahead of teammate Yehualeye Beletew Mituku, who clocked 52:15.14, and concluded with Ethiopian victories in both the men's and women's 4x400m relays.

South Africa underscored its dominance in the throws. On Saturday, Carel Haasbroek won the hammer throw by nearly ten metres with a 68.91m effort. Then, in one of closest competitions of the final day, 18-year-old Werner Dames won the javelin with a 72.75m throw, just one centimetre better than compatriot Hernu Van Vuuren.

Other highlights on the infield included Zimbabwe's Chengetayi Mapata 16.30m victory in the men's triple jump and Algerian Asmaa Baya Araibia win in the women's long jump with 6.02m.