Russell and Davis impress at Jamaican U20 and U18 Championships

The next generation of Jamaican track and field stars were on full display at the Jamaican Junior Championships, a two-day event which concluded on Saturday (24) at the national stadium in Kingston.

But the most outstanding performance by a young Jamaican athlete came during the senior National Championships, which overlapped the age-group event.

Seventeen-year-old De’Jour Russell went up against the seniors in the 110m hurdles, competing over the 107cm barriers. Russell advanced to the final after placing second in his heat in 13.57. He shaved more than two tenths from that in the final to finish fourth in a world U18 best of 13.32 (0.7m/s) behind Olympic champion and world leader Omar McLeod (12.90), world No.2 Ronald Levy (13.13) and Hansle Parchment (13.19).

“It was a tough decision between my family members and coach,” said Russell, who aims to compete at the IAAF World U18 Championships Nairobi 2017. “However, I know what my body can do and I told them to just let me take a shot at it. It was nerve-wracking competing against those guys but I held my composure.”

“I am more confident now going to Nairobi,” said Davis, who feels she needs to improve her start in the 100m. In both races Davis had to chase down 15-year-old Briana Williams, who recorded a personal best of 11.30 in the 100m and 23.57 in the 200m, finishing second in both events.

The slightly overcast sky made conditions good for sprinting and the sprinters duly obliged. Tyreke Wilson achieved a personal best en route to the U18 boys’ 100m title. Wilson, known for his smooth transition phases, stopped the clock at 10.34 (1.0m/s).

“The plan today was to come out, execute the race as best as possible,” said Wilson. “I wasn’t expecting such a fast time but I’m grateful.” Xavier Nairne (10.47) and Kevon Stone (10.58) rounded out the podium spots, both setting PBs.

There was major disappointment for favourite Michael Stephens, who pulled up with a hamstring injury which first came to light in his semifinal win (11.00) where he was seen walking in discomfort and clutching the back of his right leg.

Britany Anderson, the world U18 leader in the 100m hurdles, lived up to expectations. Anderson found herself trailing the fast-starting Daszay Freeman, who led marginally up to the seventh hurdle when Anderson came charging by her to eke out a hard fought victory, 12.94 to 12.98 (2.3m/s).

“I am driven by my competitors,” said Anderson. “My expectations are to come back with the gold from Nairobi.”

Rovane Williams was a runaway winner in the U18 boys’ 400m hurdles in 52.26, while world U18 leader Sanique Walker, returning from a two-week break, comfortably won the girls’ equivalent in 59.24.

Shaquena Foote scored a convincing victory in the U18 girls’ 400m in 53.69, more than two seconds faster than high school champion Joanne Reid (55.75). The boys’ section was far closer as Antonio Watson and Anthony Cox had to be separated by a photo finish. Both ran PBs of 47.05 with Watson being awarded the victory.

Elsewhere, Kevin Nedrick set a national U20 record in the shot put with a 20.94m effort.

Wayne Pinnock, fresh from final exams half an hour earlier, came to the stadium in a lively mood and proceeded to go beyond seven metres in the U18 boys’ long jump. Pinnock, also a fine hurdler, cut the sand at 7.02m. 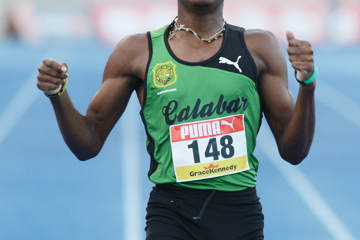 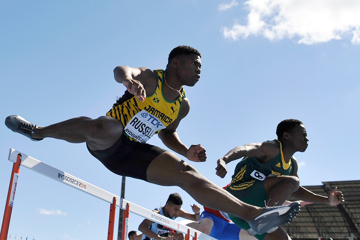