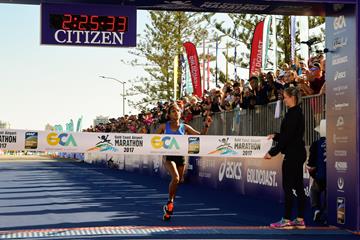 Abebe Afework slashed over a minute off the women’s race record in winning the Gold Coast Marathon on Sunday (2) while Takuya Noguchi thwarted Kenneth Mungara’s hopes of a hat-trick of overall victories with a narrow win.

Personal achievements aside, both winners reversed recent trends at this IAAF Gold Label Road Race. Afework ended a run of six straight Japanese victories in the women’s race. Noguchi not only dethroned the defending champion but his was also the first non-African win since 2013 and only the second in the last nine editions of the race. Yuki Kawauchi, who won in 2013, was third this time.

The first three men – Noguchi in 2:08:59, Mungara in 2:09:04 and Kawauchi in 2:09:18 – continued the wholesale revision of the Australian all-comers’ list in recent Gold Coast marathons. Since 2014, the race has produced nine of the 10 fastest marathons run on Australian soil.

Noguchi’s winning time was an improvement of just over two minutes on his previous best and the fourth sub-2:09 on the Gold Coast. He missed the race record set by Mungara two years ago by just 12 seconds and slots in at number four on the all-comer’s top 10.

Although the indefatigable Kawauchi did not win, he continued to deliver great service to the race. This, his sixth consecutive appearance, was his final tune-up for the world championships in London next month. You would not be advised to try this tuning strategy on your grand piano, but it seems to produce beautiful music for Kawauchi.

Kawauchi is now tied with Australian marathon great Robert de Castella at ninth place on the all-comers’ list in 2:09:18. De Castella’s time won him the Brisbane 1982 Commonwealth Games gold medal and stood as the fastest on Australian soil until Silah Limo won the Gold Coast race in 2014 with a 2:09:14.

Like Florida in the USA, Queensland’s hot and humid summers are not especially conducive to distance running. But the southern hemisphere winter - now that is a different story. Despite international championships in Sydney (2000 Olympic Games) and Melbourne (2006 Commonwealths), and major marathons in both those cities, Brisbane can now boast the 12 fastest marathons run in Australia.

Similar movement may not be far off in the women’s list. Last year Misato Horie won in a race record 2:26:40. Afework slashed 66 seconds off that mark when she raced away from Mercy Kibarus in the second half of the race to win in 2:25:34. Only the three medallists in the Sydney 2000 Olympic race have run faster on Australian soil.

The Ethiopian runner was the fastest entrant in the race with her 2:23:33 in Dubai two years ago. She also boasted good recent form with a 2:24:27 in winning in Amsterdam late last year.

At half-way on Sunday – reached in 1:13:09 – Afework went to work. Minutes earlier at the 20km mark, she had Kenya’s Mercy Kibarus and Ethiopian teammate Meseret Tolwak for company. At the half, it was just Kibarus; by 25km, she was over 100 metres clear of the Kenyan and it was a procession from there.

Afework was 1:21 ahead at 25km, having run that five kilometres a minute faster than her closest pursuer and that had ballooned out to 2:04 at 40km. She was almost three minutes clear at the finish.

Kibarus narrowly prevailed in a late-race battle with 2015 winner Risa Takenaka to take second place, 2:28:28 to 2:28:32. Elizeba Cherono of the Netherlands capped an impressive debut with a 2:29:07 for fourth.

Australia’s Virginia Moloney slashed five minutes off her previous best, set in Melbourne last October, to finish fifth in 2:29:14. A place behind her, Celia Sullohern improved almost 20 minutes on her debut appearance in the 2016 Gold Coast race, finishing in 2:34:38. Sullohern, who turns 25 on 5 July, finished 21st in the junior race at the IAAF World cross-country championships in Punta Umbria in 2011.

The attrition rate in the men’s race was a lot slower. After half-way was reached in 1:04:39, there was still a lead pack of 14 at 25km (1:16:50) and 11 at 30 (1:32:14). The next five kilometres was the fastest of the race at 15:08 and saw the leaders reduced to Ryo Hashimoto, Mungara, Noguchi, Kawauchi and Jonah Chesum with Chiharu Takada maintaining tenuous contact some six seconds further back.

Another 15:08 split to 40km saw the possible winners reduced to just three. Noguchi led from Mungara, who, as last year, was leaving his decisive move till late, with Kawauchi battling to stay. in touch.