The men’s 100m final lived up to its billing as one of the most anticipated events of the second day of athletics at the 12th African Games in Rabat on Tuesday (27).

Having maintained an unbeaten run through the rounds, Nigeria’s 20-year-old Raymond Ekevwo proved his mettle by storming to the title in 9.96, the first sub-10-second clocking of his career.

His compatriot Usheoritse Itsekiri controlled the race in the first 50 metres, with Ivory Coast’s Arthur Cisse overtaking him as they approached the line. However, the University of Florida student pipped the Ivoirian on the line to earn his first continental title at any level and becoming the first Nigerian man in 12 years to win 100m gold at the African Games.

He beat Cisse by 0.01, while Itsekiri took bronze with a PB of 10.02, an Olympic qualifying time.

The gold medal rush began for Ethiopia on day two, courtesy of Hirut Meshesha who upstaged home favourite Rababe Arafi in the 800m to claim her first senior continental title, having won gold at the African Youth Games last year. The 18-year-old clocked 2:03.16 to beat Arafi (2:03.20), while Halimah Nakaayi of Uganda finished third with 2:03.55.

Jemal Yimer Mekonnen was tipped to win the men’s 10,000m but teammate Berehanu Tsegu dominated the race and won in 27:56.81. Tsegu, contesting just the second track race of his young career, kept gesturing to Mekonnen to follow his lead to ensure a 1-2 finish for Ethiopia, but Eritrea’s Aron Kifle held on to take silver in 27:57.79 with Mekonnen settling for bronze in 27:59.02.

African shot put champion Chukwuebuka Enekwechi continued his impressive streak this season by winning the African Games title. The Nigerian, who recently extended his own national record to 21.80m, produced a best of 21.48m in Rabat to add more than a metre to Frank Elemba’s Games record of 20.25m from 2015. Egypt’s Mohamed Khalifa (20.85m) and Mostafa Hassan (20.74m) took silver and bronze respectively and were both beyond the previous Games record.

Tunisia’s African champion Dora Mahfoudhi added 11 centimetres to her PB to regain the pole vault title she last won in 2011. Her winning mark of 4.31m added 22 centimetres to the Games record and one centimetre to the Tunisian record. Egypt’s Fatma Elbendary and Dina Eltabaa completed the podium with best efforts of 4.10m and 4.00m respectively.

Having missed a podium finish in Brazzaville four years ago, Hugues Fabrice Zango returned to Rabat as the man to beat in the triple jump, having jumped an outright African record of 17.58m indoors earlier this year.

In Rabat, Zango found a leap of 16.88m was sufficient for gold, becoming the first Burkinabe man to win an athletics title at the African Games. 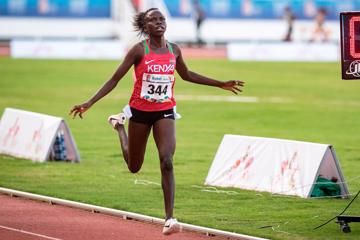