Edward Zakayo of Kenya after winning the 5000m (© Getty Images)

Kenya and South Africa reinforced their dominance on the continent at the African U20 and U18 Championships which came to a close on Saturday (20) following five days of intense competition at Stade Félix Houphouët-Boigny in the Ivorian capital, Abidjan.

Kenya topped the U20 medals table with 28 medals, 13 of which were gold, while South Africa led the way in the U18 category with 32 medals, 18 of them gold.

After a disappointing outing at the Kenyan Cross Country Championships in Eldoret back in February, Edward Zakayo bounced back into reckoning by running a world-leading time of 13:13.06 to win the men’s 5000m, leading a Kenyan sweep of the medals.

It was a PB for the world U20 5000m champion who is also the reigning senior African champion. Jacob Kiprop took silver in 13:14.44 in what was his international debut for Kenya, while Reuben Pogisho followed with a time of 13:43.46.

Zakayo’s performance broke the oldest standing championship record, taking 18 seconds off the mark set by Daniel Komen back in 1994.

Nigeria’s Enoch Adegoke followed suit on the second day of competition when he shrugged off the threat posed by South Africa’s duo of Youth Olympic champion Luke Davids and Phatutshedzo Maswanganyi to win the men’s 100m in 10.29.

The South African duo got the better of Adegoke in the 200m with Maswanganyi winning in a lifetime best of 20.77 as Davids followed in second place, while Ghana’s Edwin Gabayi settled for bronze with 21.04. Adegoke was fourth with a PB of 21.07.

Another championship record was secured by South Africa’s Rogail Joseph who impressed in the women’s 400m hurdles. Joseph proved too strong for her competitors and won by 1.51 seconds in 57.37 from teammate Gince Moraice (58.85).

Joseph had earlier won the women’s 100m hurdles and she ended her championships with a silver medal in the 4x400m.

Breyton Poole, who caught the attention of the world when winning the world U18 high jump title in Nairobi two years ago, once again held the fans spellbound with his performance and won the U20 high jump title with 2.18m.

Hat-trick of titles for Chukwuma

Youth Olympic 100m champion Rosemary Chukwuma of Nigeria enjoyed an unbeaten run in every single race she participated in at the championships. After easing her way through the rounds, she won the 100m title in 11.62 with South Africa’s Rose Xeyi taking the silver, matching the medal she won at last year’s African Youth Games.

Chukwuma extended her dominance to the 200m (23.81) and ran the anchor leg for Nigeria in the women’s 4x100m to earn her third gold medal of the championships.

Ofili and Dambile named best athletes of the championships

Ofili won medals in the U18 200m, 400m and medley relay, running a spectacular anchor leg for Nigeria in the latter. Her winning marks of 23.38 and 52.28 in the 200m and 400m respectively were not only PBs but also smashed the previous championship records. They were also quicker than the winning marks in the U20 category.

Dambile, who had set an African U18 200m record of 20.43 last month, won his specialist event in a championship record of 20.52. He went on to anchor South Africa to gold in the medley relay ahead of Nigeria. 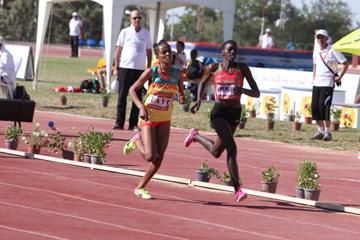