World bronze medallist Majd Eddin Ghazal headed to Ashgabat as one of the overwhelming gold medal favourites at the Asian Indoor Games, but half way through the high jump final on Wednesday (20) it looked as though the Syrian wouldn’t even make it on to the podium, let alone top it.

In a competition that started with the bar at 1.75m, Ghazal had waited for more than 90 minutes before entering the competition at 2.10m, which he got over on his second try. But a first-time clearance at 2.14m was followed by two fouls at 2.18m.

Qatar’s Mohamat Allamine Hamdi cleared that height on his first try, while Sri Lanka’s Manjula Kumara Wijesekara and Iran’s Keyvan Ghanbar Zadeh each needed two attempts to clear it. Ghazal finally cleared it on his third and final try, but it was still only good enough for fourth place.

Zadeh was the next to take the lead, going over 2.21m with ease on his first go. Wijesekara did likewise to move into second place, while Ghazal registered another failure before going over. Hamdi exited the competition after recording three fouls.

Ghazal finally took the lead with a first-time clearance at 2.24m to equal the Games record. Zadeh surrendered the lead, but got over 2.24m on his second try. Having now found his rhythm, Ghazal sailed over 2.26m on his first try. Once again, Zadeh matched that mark with a second-time clearance.

Neither man managed to go higher, with Zadeh bowing out after three failures at 2.28m and Ghazal saving his last jump for an attempt at 2.30m. But Ghazal was pleased to come away with the gold medal at the end of a long season.

“The height was not important; it could have been 2.10m or 2.20m,” said the 30-year-old. “What was important was winning the gold medal. It has been a long season for me; it started in April and now it is late September. I am ready for a rest and to rethink for next year. I didn't expect it to be so close, but it was a good competition. It's a great way for me to end the season.”

Nine gold medals were on offer on the final day of the athletics programme in Ashgabat and they went to eight different nations.

Pakistan waited until the final event, the men’s 4x400m, to win their first medal of the Games. Having been led off by individual 400m champion Abdalelah Haroun, Qatar maintained their lead for the next two legs. But on the final leg, Pakistan’s Nokar Hussain came from behind to take the victory in a national indoor record of 3:11.40, eventually winning by more than a second.

After picking up silver medals in the 800m and 1500m at the Asian Championships earlier this year, Qatar’s Jamal Hairane finally enjoyed his moment in the spotlight by winning the 800m in 1:49.33.

World shot put finalist Bian Ka produced one of the most dominant performances of the Games. The Chinese thrower won the shot put with her opening-round effort of 17.34m in a competition where no other competitor threw beyond 16 metres.

The men’s triple jump was a lot closer as just 37 centimetres separated the top five finalists. India’s Arpinder Singh took the lead in round two with 16.13m and then improved to 16.21m in the second round. That remained the top mark of the competition, but Thailand’s Pratchaya Tepparak came within nine centimetres of it with his final effort of 16.12m.

India was the only nation to pick up more than one gold medal on the final day of competition. Just 15 minutes before the triple jump got underway, Ajay Kumar Saroj had kicked to victory in the men’s 1500m, winning in 3:48.67.

The evening’s programme wasn’t completely free from drama, though. Kazakhstan had crossed the line in first place in the women’s 4x400m, but it was followed by a protest. After a 90-minute delay, Thailand was declared the winner with hosts Turkmenistan taking the bronze, their first athletics medal in the history of the Asian Indoor Games.

Although they didn’t add to their tally today, Kazakhstan topped the medals table with six gold, one silver and three bronze. They were closely followed by India (eight medals, five of them gold) and Saudi Arabia (five medals, two of them gold). 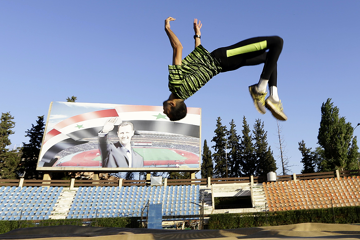 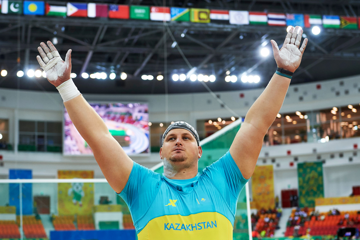 Kazakhs off to strong start at Asian Indoor G... 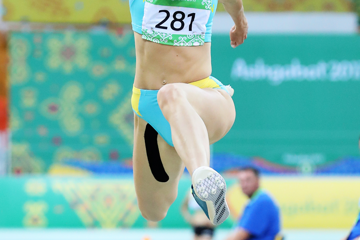