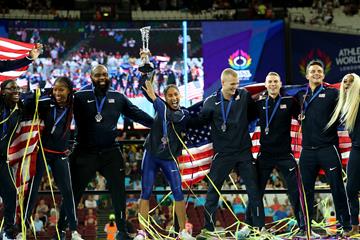 The US team celebrates their victory at the Athletics World Cup in London (Getty Images) © Copyright
16 JUL 2018 Report London, UK

USA built on their overnight lead during the second day of the Athletics World Cup in London on Sunday (15), winning six of the 17 events to lift the trophy at the first staging of the eight-way multi-nation competition.

Their one-lap sprinters in particular helped in racking up the points as they won the men’s 400m, 400m hurdles and 4x400m relay. Their other victories on Sunday came in the men’s pole vault, women’s 800m and women’s high jump.

Two days after competing at the IAAF Diamond League meeting in Rabat, USA’s Paul Dedewo won the 400m by exactly a second in a PB of 44.48 to claim maximum points in the first track event of the day.

On the field, world champion Sam Kendricks contributed to USA’s strong start to the day, winning the pole vault with a 5.83m clearance. Germany’s Raphael Holzdeppe was second with 5.75m.

Poland and Great Britain both moved up the leader board on the second day to end the competition in second and third respectively.

After winning the women’s hammer and 1500m on the first day, Poland claimed victories in the men’s equivalent on Sunday. World and Olympic bronze medallist Wojciech Nowicki won the hammer with 77.94m, while Marcin Lewandowski won a tactical 1500m in 3:52.88.

Although they finished seventh in the final standings, South Africa could at least lay claim to arguably the top performance of the second day. World champion Luvo Manyonga flew out to 8.51m in the first round of the long jump and consistently backed it up with marks of 8.48m, 8.50m and 8.50m. NCAA champion Zack Bazile of the USA finished second with 8.30m.

Hosts Britain had to wait until the penultimate track event for their first and only victory on Sunday. Their women’s 4x100m team won in 42.52 from Jamaica (42.60) while the USA failed to get the baton around.

USA fittingly won the final event, the men’s 400m, in 2:59.78. World indoor champions Poland were a distant second, reflecting their position in the final standings.