Italian high jumping continued to go from strength to strength as Gianmarco Tamberi and Marco Fassinotti jumped a world-leading 2.35m at the Banskobystricka latka High Jump Meeting in the Slovak city of Banska Bystrica on Thursday (4).

A capacity crowd turned up to the Stiavnicky Sports Hall to watch the 22nd edition of the meeting as many of the athletes in the field – including Tamberi – were making their season debut.

Tamberi, sporting his famous ‘half beard’, led during the earlier heights after clearing 2.20m and 2.24m on his first attempts. 2004 Olympic bronze medallist Jaroslav Baba then took a brief lead with a first-time clearance at 2.27m. 2007 world champion Donald Thomas also cleared that height on his first attempt and moved into second place.

Seven men were still in the competition with the bar at 2.30m. Tamberi and Matus Bubenik of the Slovak Republic were the only athletes to get over the bar on their first try. Fassinotti and Olympic bronze medallist Robbie Grabarz needed two attempts to go clear, while Thomas finally succeeded on his third attempt at 2.30m.

Thomas then took the lead as he went over 2.33m with his first attempt, equalling the indoor PB he first set back in 2007. Fassinotti once again needed two tries, while Tamberi and Grabarz both got over it on their third attempt, leaving four men in contention.

First up to try 2.35m, Tamberi went clear on his first attempt to regain the lead and break the Italian indoor record. As with the previous two heights, Fassinotti succeeded on his second attempt to equal Tamberi’s national mark, but Thomas and Grabarz exited the competition.

It meant that the two Italians were the only ones left in the competition as the bar was upped to 2.37m. Neither man succeeded, and Tamberi saved his final attempt to try for 2.40m, but he was far from disappointed with his performance.

“I didn’t expect such a good result in my first meeting,” said Tamberi. “I love it here, it’s one of the best surfaces. I’ll be back next year to try to jump 2.40m.”

Doreen Amata made history by becoming the first non-European winner of the women’s competition in Banska Bystrica after clearing a Nigerian indoor record of 1.93m.

World leader Airine Palsyte made a surprise early exit from the competition after failing to clear 1.85m, some 12 centimetres lower than her winning jump in Cottbus last week.

Eight women progressed to the following height, 1.88m, at which point Amata recorded her first failure, as did Sweden’s Sofie Skoog. But they both got over it on their second try to join the likes of world junior champion Morgan Lake and world youth champion Michaela Hruba in attempting the next height.

Amata was the first to go clear at 1.91m, adding two centimetres to the Nigerian indoor record she set eight years ago. Skoog also got over it on her first attempt, upping her recent indoor PB by one centimetre.

Hruba was the only other woman to clear 1.91m, doing so on her third and final attempt. Hruba and Skoog could go no higher, failing three times at 1.93m, but Amata sailed over on her first try. She rounded out her competition with three failed attempts at a would-be African indoor record of 1.98m. 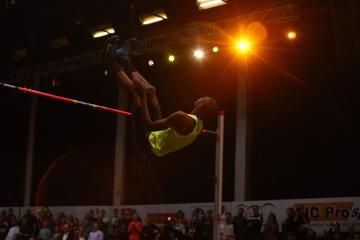