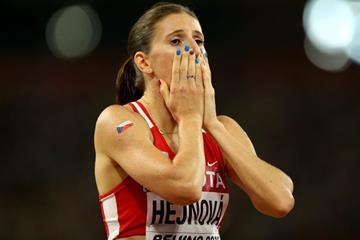 Zuzana Hejnova came to Beijing to defend her world title from Moscow two year, and after an injury-stricken 2014, in the final she had to deal with the whole new generation of fast and fierce ladies.

But the Czech’s execution in Wednesday night’s race was impossible to match.

Many expected this final to turn into a duel between Hejnova and Jamaica’s Kaliese Spencer.

Spencer was dominant in 2014, winning the Diamond Race title and the Commonwealth Games. She started this season off strong, as well, and despite missing more than a month through injury mid-summer, the Jamaican in Beijing looked strong and confident.

But, as so often happens in the hurdles, one small mistake can turn the race upside down.

Spencer caught on the second hurdle, and even though she kept running, her involvement in the chase for a medal was effectively over.

In the meantime, USA’s Cassandra Tate, just like in preliminary rounds, went out the fastest and was confidently leading throughout the first half of the lap.

On the bend, however, the American started to visibly tire out and lose her rhythm, having to curtail her steps before attacking hurdles.

Hejnova, in turn, was flawless, once again proving that the second half of the race is definitely her forte.

A 2:03 800m runner and a sub-52 400m runner, the Czech successfully uses her speed endurance to maintain rhythm and stay aggressive, when the lactic acid starts to flow.

On the home straight, Hejnova was already in the lead.

And, to make matters worse for her, Tate clipped the ninth hurdle with her trail leg, losing her last realistic hopes for victory.

Crossing the line in 53.50, a 2015 world-leading time, Zuzana Hejnova also made the history in addition to sending the small contingent of Czech fans into rapture. Despite the illustrious roll-of-honour, she became the first ever athlete to successfully defend the world title in this event.

Second place was taken by a Team USA representative, but it wasn’t Tate who wilted over the final metres.

The 2014 world junior champion and 2015 US champion Shamier Little had a rough path to the final.

She had issues with her rhythm in the heats, finishing fourth with the second slowest qualifying time of the first round. In the semi-final, Little missed out on automatic qualification and but just scraped into the final on time.

It’s not surprising, pundits were saying, as the 20-year-old had every reason to be tired. She had a full collegiate season and managed to squeeze in a win at the Pan American Games across the border in China before the trip to China.

But tonight, in lane two and the inside lane for the runners, Little just ran her own race, didn’t make any noticeable mistakes, and finished second in 53.94.

Just like Hejnova, the young athlete played her best cards at just the right moment and came away with her first global championship medal as a senior.

It wasn’t Little’s fastest race of the season, her personal best remains the 53.74 that won her the US title in June, but the Texas A&M student will not be too worried about that.

Tate, despite the mishap on the home stretch, finished third in 54.02, just 0.01 off her personal best set when finishing behind Little at the US championships.

Denmark’s Sara Petersen, in many respects the discovery of this season, was finishing strong, but came just short up of a medal, taking fourth in 54.20; while Jamaica’s Janieve Russell was fifth in a personal best of 54.64.