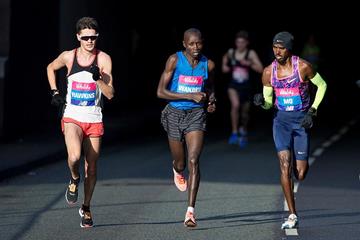 Farah wins Big Half in London

Seven weeks ahead of his scheduled return to London for the Virgin Money London Marathon, Mo Farah warmed up with an assured victory at the inaugural Vitality Big Half on Sunday (4).

The quadruple Olympic champion sprinted away from London Marathon champion Daniel Wanjiru of Kenya to win by three seconds in 1:01:40 over the 13.1 miles, while fellow Brit Charlotte Purdue was first woman in 1:10:29.

As 11,000 runners lined up at the start near Tower Bridge, temperatures were milder than the wintry weather that Britain had experienced most of the rest of the week and which left the staging of this event in slight doubt until a Friday night snow thaw.

However, with the thermometer at about 6C, Farah, Wanjiru and eventual third-place finisher Callum Hawkins, who had been training in various warmer climes, were in no mind to hang about when the gun went and quickly established a sizeable lead.

Nevertheless, with the first mile covered in 4:41 and five kilometres reached in 14:34, superfast times weren’t on the cards. Despite the course being fairly flat, with sections in common with that of the London Marathon, it was twisty and the main contenders were perhaps saving themselves for upcoming marathons.

Soon after five miles was passed in 23:30, Mo Farah surged to quickly create a gap of six or seven metres. Hawkins would later explain this was straight after he himself suggested to Wanjiru they up the pace. Farah later admitted: “I was just playing around with the guys, having fun. I just got excited a bit. I wasn’t trying to do any damage or anything.”

Sure enough, Wanjiru and Hawkins were back with him by the time the 10-kilometre marker was taken in 29:08.

Going over Tower Bridge, it was Hawkins doing the leading – as he did for much of the race – and 15km was passed in 49:51. Particularly from 10 miles on, Hawkins – fourth in the marathon at the World Championships last year – was desperate to break the other two, especially in fear of Farah’s lethal kick.

However, as they went past 20 kilometres in 58:35, Wanjiru and Farah were still there. And for the spectators gathered at the finish, the sight of Farah sprinting away clear of his rivals to victory was as familiar as the historic Cutty Sark ship which provided the backdrop.

Hawkins was three seconds further behind Wanjiru as all three were more than three minutes ahead of the rest of the field.

“I thought the race would be a bit faster than that,” said Farah afterwards. “It was nice to feel comfortable in myself. I know I’m in shape.”

Having just returned from six weeks training in Ethiopia, he is confident as he prepares for his first marathon after his decision to focus on the roads.

“Some of the sessions and work I’ve done in the last three or four weeks have been unbelievable,” he said. “I think I still have it. It’s just the mental side of it. I want to be as competitive as on the track.”

“I think that’s the priority, personal best for sure but also the British record if possible and then from where we’ll see,” he said. “It (beating 2:05 runner Wanjiru) gives me confidence, but I’m stronger at the half marathon. It’s completely different when you’re running 26.2. You’ve got to learn about the event.”

Wanjiru seemed content with second, not wanting to go full-out with the return to the English capital in mind in just seven weeks’ time.

“The race was good. I enjoyed the course,” he said. “I’m doing good training for the marathon in April. When I go back to Kenya I’ll try to finalise my training and try to come and defend my title and run my personal best in London.”

Hawkins, who is aiming for the Commonwealth Games marathon in April, said: “I did try my best towards the end to get a gap, but he was just sitting there. I had to because I knew coming into that last corner I’m not going to break him. I was just doing everything I could. I knew he (Farah) was just doing enough.”

Purdue ran with fellow Brit Lily Partridge until about 15 kilometres when, without increasing the pace, her fellow London Marathon-bound runner started to struggle. They had earlier gone through five kilometres in 16:30 and 10 kilometres in 33:11 and were on for sub-70 until about eight miles.

The winner, who was 15th in the marathon at the World Championships last year, set a PB by exactly a minute as Partridge was second in 1:11:06. For third-placed Charlotte Arter, 1:11:35 was also a career best.

Explaining her fast start, Purdue said afterwards: “I flew back from Australia this week and I’ve hardly done anything so I felt really fresh. So I just wanted to go out hard today purely because I’d not done much running. I just wanted to see how I felt. I remember thinking, ‘This is fast’, but I didn’t feel tired so I didn’t want to slow down.”

“Half marathon is an event which I’ve always struggled a bit at compared to the marathon,” added Purdue, who has a marathon PB of 2:29:23. “To run faster over the half is really promising for the marathon.”