When it comes to season openers it doesn’t get much better than breaking a world best and that’s exactly what Femke Bol did on her return to the Ostrava Golden Spike, a World Athletics Continental Tour Gold meeting, on Tuesday (31).

On a warm and sunny evening when barriers were there to be cleared and broken, Bol smashed the world 300m hurdles best with a 36.86 run, while Lamecha Girma surged to 12th on the world 3000m steeplechase all-time list with a world-leading Ethiopian record of 7:58.68. Joe Kovacs got the better of Tom Walsh in a shot put head-to-head, while Reece Prescod powered to a PB to win the 100m.

On the eve of a meeting where Czech 400m hurdles star Zuzana Hejnova was to bid an official farewell to her successful competitive athletics career, organisers joked how they would not mind if Bol spoilt the retirement party as she targeted Hejnova’s world 300m hurdles best of 38.16 set in Cheb in 2013. The Dutch hurdles ace went close with 38.55 in Ostrava in 2020 and since then has become an Olympic bronze medallist with the European 400m hurdles record of 52.03 she set in Tokyo last year.

As Hejnova waved to her home crowds on Tuesday, Bol got ready to settle into her blocks and she burst out of them a short while later, on her way to making more history.

Ahead at the first hurdle, the 22-year-old was away and she extended her advantage until she crossed the finish line with 36.86 on the clock, taking more than a second off Hejnova’s previous world best.

“I'm pretty surprised to be so fast tonight,” said Bol. “Honestly, I expected that I could run 37-something, but it's just the beginning of the season, that is why I still can’t believe that an all-time world best was possible to do in the first race of the summer.”

Girma joined Bol in making a major statement in a year when the World Athletics Championships Oregon22 is the main aim.

After finishing second on his season opener at the Wanda Diamond League meeting in Doha, there looked to be no question as to his success this time as he broke away with his compatriot Hailemariyam Amare and went on to dominate the race. They followed the pacemaker through 1000m in 2:42.37 and Girma passed 2000m in 5:19.22 before reaching the finish line ahead of the clock hitting eight minutes, becoming the first athlete since 2018 to break that time barrier and improve his own Ethiopian record. Amare was second in a PB of 8:07.70.

Jamaica’s 2011 world champion Yohan Blake went out hard but Britain’s European silver medallist Prescod had the most powerful finish and a strong final 20 metres in full flow saw him breeze by for victory, finishing clear ahead of Blake and his British compatriot Zharnel Hughes, both with 10.05.

“It was a great race, so I am really happy about that,” said Prescod, whose performance improved his 2018 PB by 0.01 as he dipped below 10 seconds for the first time since 2019.

“I saw Nethaneel’s race just before and that fired me up,” Prescod added. “He ran well and that definitely motivated me. I feel in a good place. I’ll next compete in Slovakia and hopefully get myself into some hot races now after running that time.”

Mitchell-Blake’s 100m win came 50 minutes after the 2017 world relay champion anchored the British team to a 4x100m meeting record, combining with Jeremiah Azu, Hughes and Richard Kilty to clock 38.43. The Czech quartet was second in 38.98, while the largely domestic women’s race was won by the Czech Republic B team in 44.47, half a second ahead of the A team.

The women’s 200m saw victory for Niger’s Aminatou Seyni as she broke her own national record with 22.21 (-0.2m/s). Finishing second was US sprint legend Allyson Felix, who clocked 22.78 as she continues her final season in competitive athletics before retirement.

"I am very glad for the victory, because the field was very strong," said Seyni. "I feel confident and it was a big honour to run against Allyson Felix on her last circuit."

Puerto Rico's Olympic 100m hurdles champion Jasmine Camacho-Quinn was among the athletes to have made the journey to Ostrava from the Diamond League meeting in Eugene at the weekend and despite feeling the effects of that, she raced to another win. 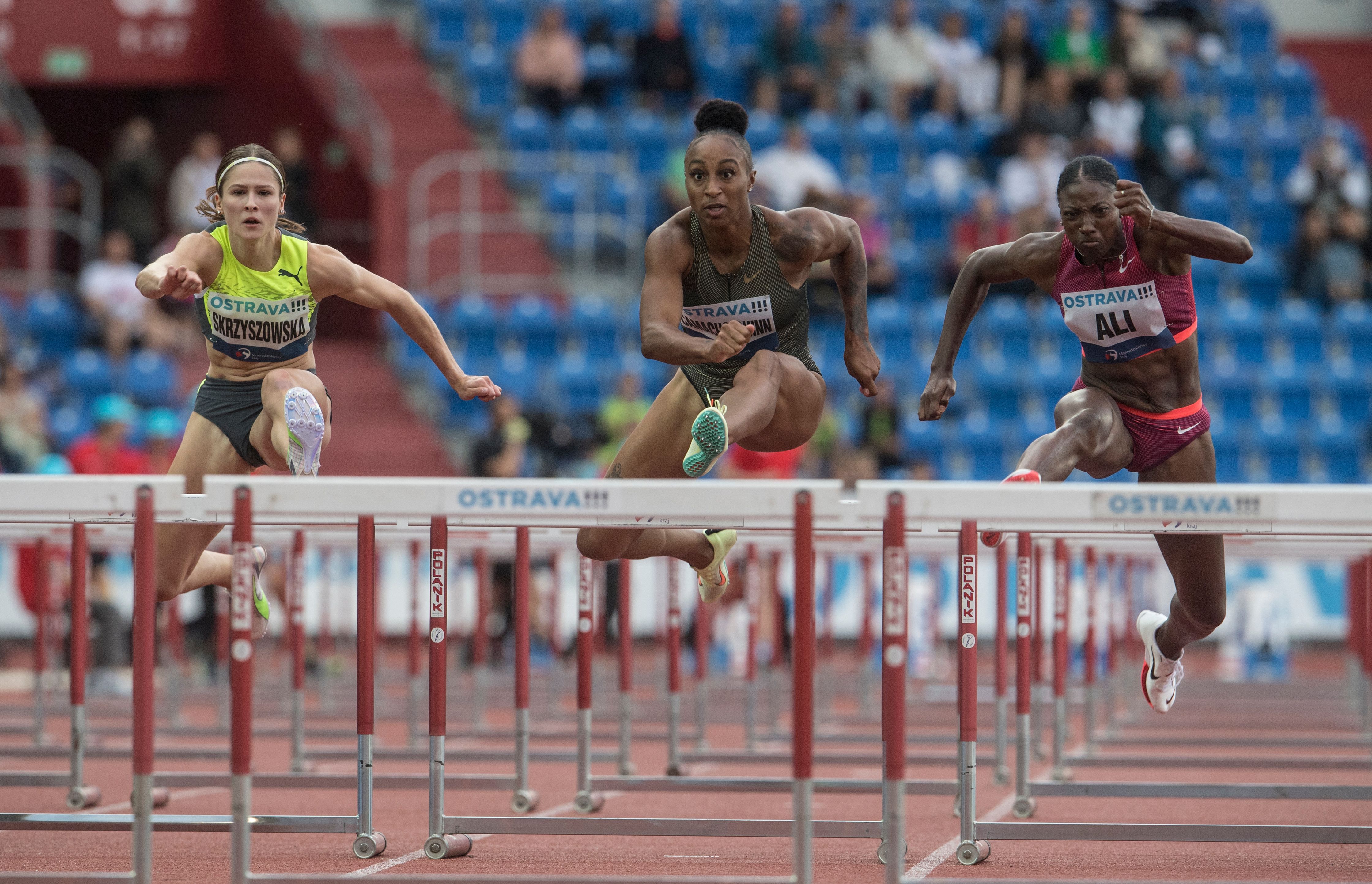 Poland’s Olympic mixed 4x400m champion Natalia Kaczmarek won a thrilling 400m clash, finishing fast to overcome Jamaica’s Olympic fifth-place finisher Candice McLeod and her Olympic relay medallist teammate Anna Kielbasinska. Running in lane eight, Kaczmarek was behind off the final bend but came through in a big PB of 50.16, a mark that puts her second on the Polish all-time list. McLeod clocked 50.38, getting second place ahead of Kielbasinska’s PB-equalling run of the same time.

Ethiopia’s 20-year-old Diribe Welteji continued to impress in the women’s 1500m, following up her win in Nairobi earlier this month with a 3:59.19 triumph. Her second-quickest ever time behind her national U20 record run last year, she led the next six finishers to PBs and was followed by her compatriots Ayal Dagnachew – her fellow 20-year-old who won world U20 800m gold last year and improved her 1500m PB by almost nine seconds to 3:59.87 – and Netsanet Desta with 4:00.84.

Kenya’s world U20 champion Emmanuel Wanyonyi was another to follow a Continental Tour Gold meeting win in Nairobi with victory in Ostrava, the 17-year-old improving his season’s best to 1:44.15 as the top five all went under 45 seconds. He dipped for victory, narrowly holding off Algeria’s Slimane Moula in a fierce finish, which resulted in a PB of 1:44.19 for the runner up. Max Burgin (1:44.54), Noah Kibet (1:44.89) and Nijel Amos (1:44.92) followed them over the finish.

Global champions put on a show

In a clash of world shot put champions it was USA’s Kovacs who launched himself ahead in the very first round and that was a lead he wouldn’t relinquish. Improving to 22.25m with his fourth throw, the 2015 and 2019 world title winner secured a half-metre victory ahead of New Zealand’s Walsh and missed world record-holder Ryan Crouser’s meeting record by just 18cm.

That was despite the pair only arriving in the Czech Republic in the early hours of event day, following their competition at the Diamond League meeting in Eugene on Saturday. 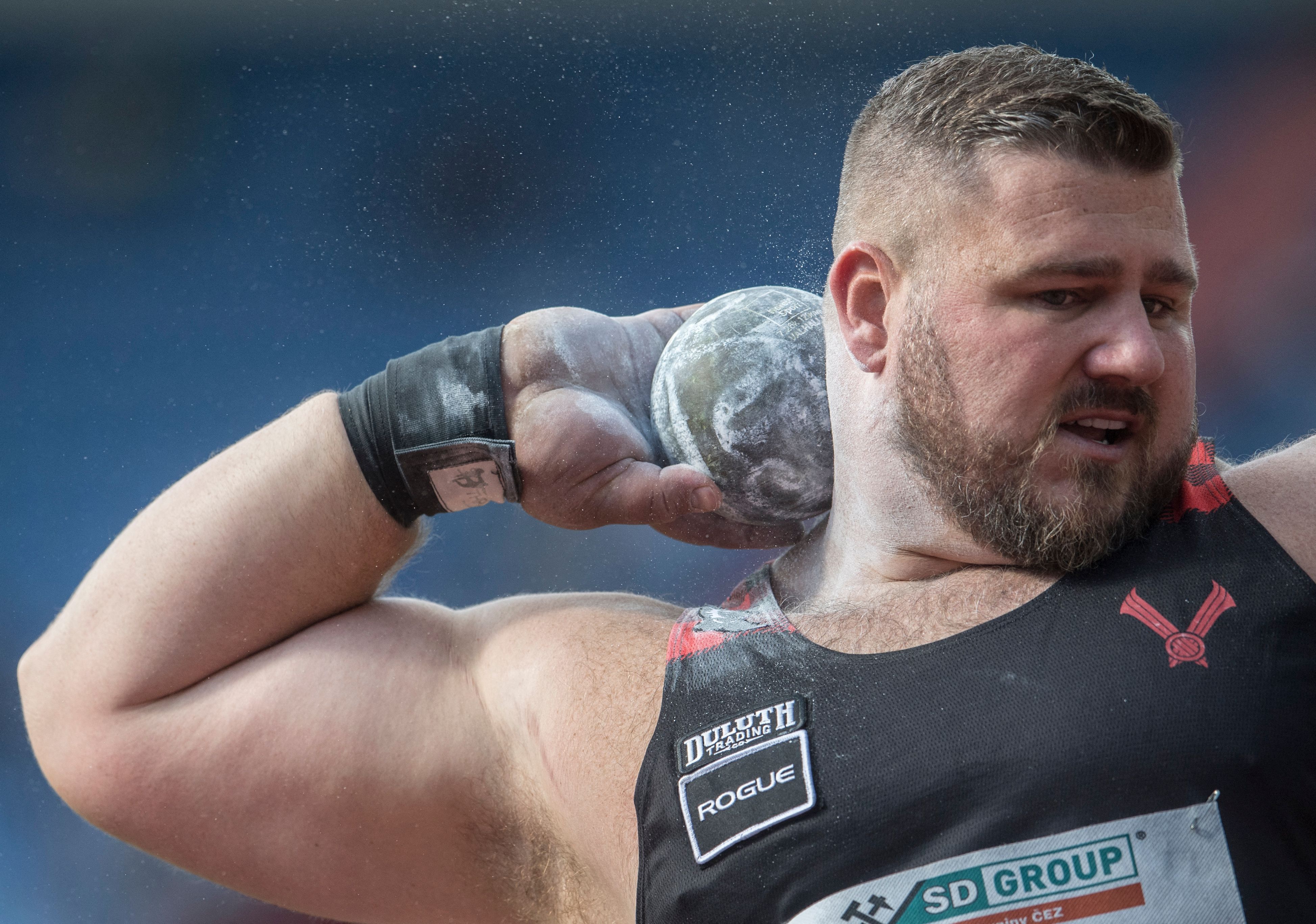 “I am happy not only because of the win, but also because I almost had three throws over 22 metres, and 22.25m - even in these circumstances,” said Kovacs, who also threw 22.00m and 21.99m. "We got to Prague last night at 2am and woke up today just a couple of hours ago."

The 2017 world champion Walsh was second with 21.68m from the final round.

Italy’s joint Olympic champion Gianmarco Tamberi started his birthday celebrations early as he cleared 2.30m to win the high jump. Again sporting a half beard, he achieved that season’s best mark on his second attempt and went on to have three tries at a world-leading height of 2.34m. Brazil’s Fernando Ferreira was second with 2.27m.

“We still have six or seven hours until my birthday, so I am still 29, I am still young,” Tamberi joked. “Because I was struggling a bit at the beginning of the season, I wanted to push myself, so I did the half-shaved face again. I needed to fight, and this is my weapon.”

After throwing 93.07m at the Diamond League in Doha, Grenada’s world javelin champion Anderson Peters continued his unbeaten season, throwing 87.88m for his fifth victory of the year and his second-best ever winning mark.

After that North & Central American and Caribbean record-breaking throw in Qatar, Peters’ aim is consistency above 85 metres and he achieved that by following up his first-round 87.88m with marks of 87.75m and 85.12m.

Elina Tzengo of Greece added more than a metre to her personal best to win the women’s javelin, launching 65.40m in the second round to triumph by more than two-and-a-half metres.

European silver medallist Nikola Ogrodnikova opened with 61.58m to take an early lead but 19-year-old Tzengo, who won world U20 silver in Nairobi as well as the European U20 title in Tallinn last year, responded with her PB effort to take top spot.

Competing in front of home fans, Ogrodnikova saved her best until last and improved to 62.78m to consolidate her place as runner-up, while Serbia’s Adriana Vilagos, who got world U20 gold in Nairobi ahead of Tzengo, was third with 59.80m.

Slovenia’s world indoor bronze medallist Tina Sutej matched the season’s best of 4.65m she set at the Birmingham Diamond League to win the pole vault on countback ahead of Lene Retzius, who twice improved the Norwegian record.

Sutej needed all three attempts at 4.50m and 4.60m but soared clear on her first try at 4.65m to clinch the win. Retzius first improved her own national record to 4.60m, before managing 4.65m on her third go.

Cuba’s Maykel Masso won the men’s long jump, leaping 8.14m (0.5m/s) in the fourth round and surpassing eight metres with each of his four valid attempts to triumph by three centimetres ahead of Czech Republic’s Radek Juska. 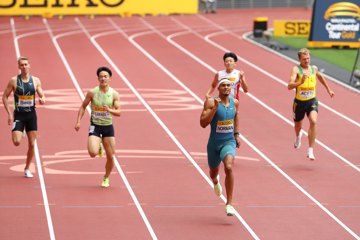 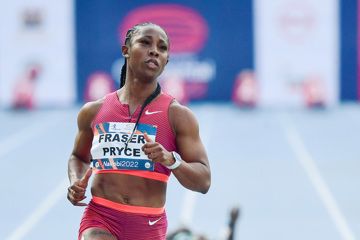 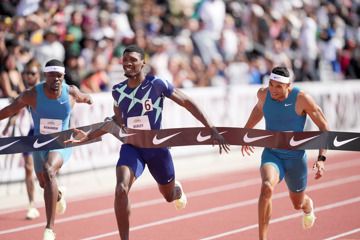