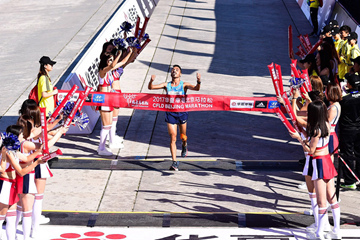 The 26-year-old Bounasr clocked 2:11:18, 64 seconds outside of his personal best set when finishing fifth at the Prague Marathon in May and well shy of the course record of 2:07:16 registered by Ethiopia’s world bronze medallist Tadese Tola in 2013.

“It is a little bit hot today, I tried my best in the race but still could not break 2:09 (the minimum requirement for the full prize money),” said Bounasr, who will celebrate his 27th birthday in ten days. “I came here for the win and I am glad to accomplish the goal.”

The race was staged under sunny conditions with temperatures ranging from 19 to 24 degrees. A leading pack of 13 runners including defending champion Mekuant Ayenew and 2014 winner Girmay Birhanu, both from Ethiopia, covered the first five kilometres in 15:46.

The leading group remained patient and calm in the first half of the race with only one man dropping down before 22 kilometres. But two kilometres later the group began to shrink quickly following a series of speed changes.

When the leaders hit the 32-kilometre mark, only four runners were left, including Birhanu with a PB of 2:05:49, Kenya’s Stephen Kwelio Chemlany and Bounasr as well as his countryman Zakaria Boudad, the winner of the Wuhan Marathon in April.

Birhanu began to pull away after 36 kilometres and by 38 the 2015 Daegu and Ottawa marathon winner had established a five second lead. The 30-year-old led for another two kilometres before he was caught by Bounasr, who soon took the sole lead and never looked back until breaking the tape.

It was the third marathon of the year for Bounasr and the second victory in his career following the 2:11:09 win at the 2016 Guangzhou Marathon last December.

The women’s race also witnessed change of leaders in the second half as the 23-year-old Beyene registered 2:27:44, the second fastest of her career, to fulfill her comeback victory.

“I didn't expect to win and I am really happy for the victory”, said Beyene, who ran in the Chinese capital for the first time. “I want to thank all the supporters because the atmosphere was so good, so amazing. I hope I can come back next year.”

Rahma Tusa of Ethiopia built a clear early lead after five kilometres. Her compatriot Beyene and Mulu Seboka, who was the fastest entrant with a PB of 2:21:56 set at the 2015 Dubai Marathon, as well as Rebecca Kangogo Chesir from Kenya formed the chase pack.

The 24-year-old Tusa was targeting her second win of the season after setting a PB of 2:27:21 in her successful title defence at April’s Rome Marathon. She led through the half but slowed down gradually before being caught by Chesir and Beyene as they approached 28 kilometres.

Beyene, then, continued her rampant rhythm. She needed only one more kilometre to break from the other two and maintained her comfortable lead until the finish.

This was Beyene’s second win in China. She also claimed the 2015 Heifei Marathon and in her last performance this season was a runner-up finish in Barcelona, where she improved her PB to 2:26:44.