Kwizera claimed his fourth win in the World Cross Country Tour this season after finishing first in Amorebieta, Alcobendas and Venta de Banos. Daniel, meanwhile, achieved her second consecutive podium finish at Campaccio, having finished second last year. They also became the first athletes from Burundi and Eritrea to win at Campaccio.

During the early stages of the men’s race, Kwizera was part of a nine-man lead pack that also included Bahrain’s Birhanu Balew, Burundi’s Edine Ntakarutimana, Uganda’s Oscar Chelimo and Italy’s Yemaneberhan Crippa. They passed through the first lap in 5:59, the second lap in 11:51 and the third lap in 17:42.

During the fourth lap, the lead group was whittled down to just Balew, Kwizera, Crippa and Chelimo. Crippa, the European 10,000m champion, made the first serious move and took the lead for the first time. He covered the fourth lap in 2:50 and only Balew and Kwizera were able to follow him.

The Italian led at the bell and continued to run at the front for most of the final lap until the final 500 metres when Kwizera and Balew launched their attacks. In a thrilling finish, the race went down to the wire with Kwizera edging Balew just metres before the line, both men clocking 28:42.

“This was my first time competing at Campaccio,” said Kwizera, who will soon turn his attention to the World Cross Country Championships in Bathurst where he hopes to improve on his 11th-place finish from 2019. “It was exciting to run here but it was a very hard race. It was very good preparation for the World Cross Country Championships in Australia. I decided to launch my attack during on final lap. It was a very close and exciting sprint.”

Crippa finished third in 28:47, becoming the first Italian athlete to reach the podium at Campaccio since 2015. The multiple Italian record-holder finished five seconds ahead of Chelimo, avenging the result of the BOclassic last Saturday when the Ugandan finished ahead of Crippa.

“Nobody took the initiative and I decided to push the pace during the fourth lap,” said Crippa. “I started dreaming about winning the race, but Kwizera and Balew were stronger than me. I will train in Portugal before the Cinque Mulini, then I’ll train at altitude in Kenya to prepare my marathon debut in Milan on 2 April.” 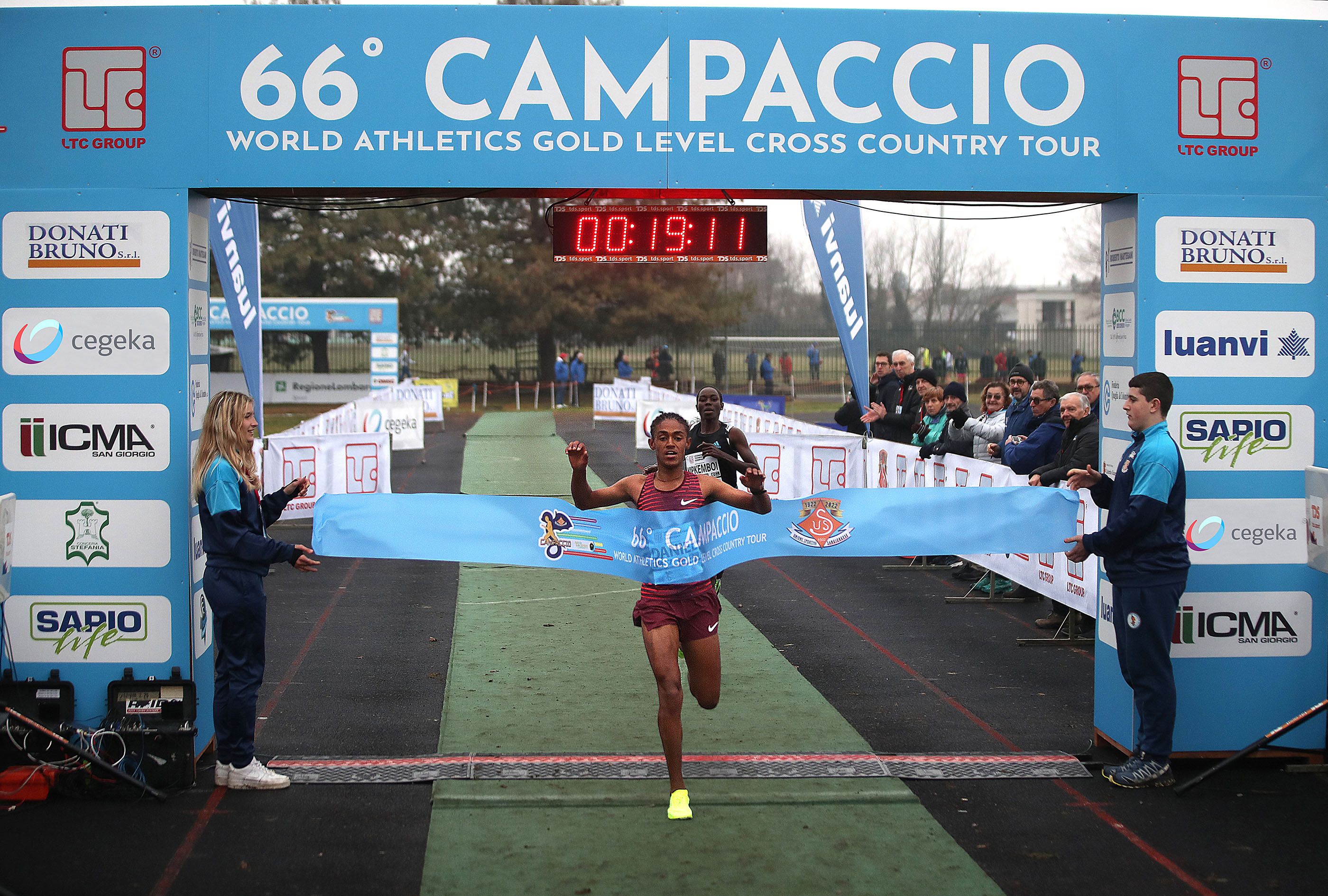 Daniel and Kipkemboi broke away from Nyomokunzi during the second of the three laps and reached the 5km marker in 16:08, seven seconds ahead of Nyomokunzi and Chebet.

During the final lap, Daniel and Kipkemboi ran neck-and-neck until Daniel launched her attack on the uphill section of the course. She crossed the line in 19:10, finishing two seconds ahead of Kipkemboi, who repeated her second place in San Giorgio su Legnano from the 2020 edition.

“It was fantastic to run the Campaccio and receive the support from the crowd,” said Daniel, who finished fifth over 10,000m at the World Championships in Oregon in a national record of 30:12.15. “I competed in San Giorgio su Legnano last year and I was prepared for this course. I finished second here last year, so I really wanted to win today. I felt in control until the last lap when I launched my final sprint.”

Chebet crossed the finishline in 19:31. Battocletti overtook Nyomokunzi to finish fourth in 19:18, her best ever finish in San Giorgio su Legnano.

BACK
Pages related to this articleAthletes
Rodrigue KWIZERA